On day 6 we packed our bags and headed to the pier for the ferry to Santorini. I had no idea what to expect, but the ferry was very large and quite luxurious…the seats were far roomier and more comfortable than the ones on planes!

The Trip from Mykonos to Santorini:

With stops at the islands of Paros and Ios, the entire trip took roughly 2.5 hours. Luckily, we had entertainment…THE BEST part of the ferry trip was: 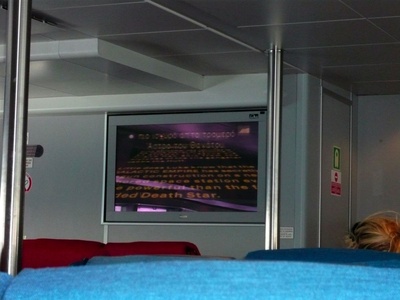 They played Return of the Jedi!

After disembarking, we met our transport who drove us up a VERY steep cliff. The roads were straight out of a movie: narrow, winding zig-zags that were cut directly into the cliff.

After driving through the town of Fira, we approached some buildings that were clearly more luxurious and secluded from the rest. This was where the Santorini Princess was located.

The hotels we stayed in at Athens and Mykonos were both 3.5-star hotels, but we had decided to splurge and go out with our hotel in Santorini. I had learned about the Santorini Princess from a internet friend and worldwide traveler who informed me that this is, hands down, the best hotel she’s ever stayed in. With 5-star accommodations and and impeccable reviews, the Santorini Princess sure did not disappoint.

Arriving at Santorini and the Santorini Princess:

Not only was the view gorgeous (the front faced west for watercolor sunsets, the back faced east for immaculate sunrises), the facilities were A-class and the staff just brilliant. For example, they only came to clean the room when we were out, as opposed to other hotels who usually interrupt for maid service. How did they know we were out?

The restaurant served a great mix of traditional Greek and Mediterranean dishes, and both J and I agree that the food here was the best of all we tasted in Greece. The hotel even has its own sommelier who was very friendly but proper, recommending a €21 bottle of white wine that tasted far superior than $100+ bottles we’ve tasted in the states.

(Note: Santorini, with its hot sun and wet soil, produces some of the best white wine in the world. They say that there is more white wine than water in Santorini, and this certainly seemed to hold true during our stay there.)