I’ve had the good fortune of meeting BoA, the Korean/Japanese pop sensation.

My uncle is a very powerful man in the Korean entertainment business. When I visited Korea in 2000, he was the Vice-President of Broadcasting at MBC, which is one of the main broadcasting companies in Korea.

(As a side note, I’m proud to say that one of the very last showed produced under his tenure as the VP of Broadcasting was the hit drama 대장금, or Dae Jang Geum, which still remains one of the most popular dramas in Korean history.)

While he holds an even higher position now, his former title was an impressive one nonetheless. He took me on a tour of the studios and I gaped and gawked, starstruck. My visit to MBC was one where no one dared to refuse and no doors were closed (even shows that were currently live on air). Everyone seemed to cower in his presence – even movie stars and popular singers.

It was in this environment that I met BoA. She had just started to become popular at the tender age of 13. Her first hit Korean single, “Sara,” was about her Persian cat…and I got to hold the said cat backstage while she performed on stage. We exchanged small talk, and I remember thinking, “Wow, she’s so young.”

Since then, BoA developed into quite a star. Dubbed “the Korean Britney Spears” (pre-KFed), BoA became one of eastern Asia’s most popular celebrities.

I read recently that BoA is looking to expand into the U.S. market. I was skeptical – Asian pop culture is vastly dissimilar to that of the U.S. I’m pretty certain that she will not be able to “make it” here.

However, I can’t discredit her for lack of trying. In a couple of weeks, BoA will perform live at the MTV Studios in Time Square. You can even win tickets: 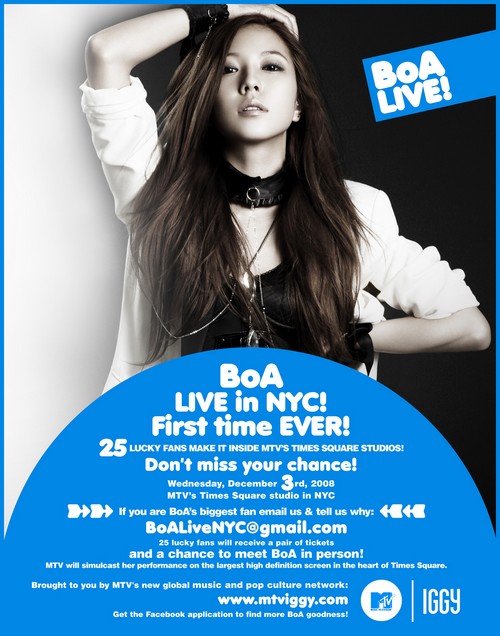