Guest Post: Women in Tech, Where for Art Thou?

Susan is another reader whom, upon first glance at her own blog, I immediately added to my Google Reader. A fellow girl geek and a fantastic writer to boot, I truly feel honored to be able to share three of her posts in the upcoming weeks.

This particular post talks about a topic I often struggle with myself, and I remember bookmarking the exact same piece from TechCrunch with the intent to blog about it. Lucky for me, Susan has done the job herself in a succinct and well-written post that is worthy of much praise. Enjoy!

I work in a technology field, though sometimes my technical skills leave much to be desired; the copier at work ate one of my documents recently, leaving me staring helplessly in horror. So you might think I’d be offended by this post/rant from a while back at TechCrunch, a site I read daily, saying that everyone (ahem, women) needs to stop whining about the lack of women represented in the tech industry. They fully support women in tech, despite accusations to the contrary. They support the women they can find, that is. The reason they don’t have more women speaking at their events is that the women they ask to participate are already booked. 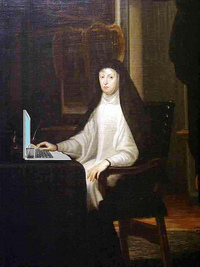 I don’t disagree. Sometimes it seems there are not a whole lot of us. There are even less women out there with their own start ups, though I am pleased to say I know one. But it’s not for lack of encouragement, which I think is the claim some people register. In fact, TechCrunch says that press and other outlets are falling all over themselves to shine a positive light on women entrepreneurs. An example of this is the recently failed search engine Cuil, which received extensive coverage on TechCrunch.

Women traditionally have been caretakers, and for someone who likes that role, it can be difficult to go from towing the company line to writing it. Not to mention the financial instability of starting your own company from scratch. If you are a Mom, I can see where that might make you uncomfortable. Kids are always needing expensive stuff like food and clothing. If you don’t know how well your business might do from month to month, it’s hard to figure out how to take care of your family. Read some of Penelope Trunk‘s blog posts and you’ll get the idea.

It doesn’t mean we lack ideas or even motivation. But I think it can make us more careful about carrying them out, which is not always ideal in the world of the fast and loose start up. So what will it take to get more women in tech? I don’t have the answer, and neither does TechCrunch. But I am going to keep my eyes open, and see if anyone is still complaining about it five or ten years from now. I have a feeling we won’t.

5 Responses to “Guest Post: Women in Tech, Where for Art Thou?”