I don’t put much stock in astrology or zodiacs, but I gotta give some cred to this geek zodiac, created by James Wright and designed by Josh Eckert. (Click to view large) 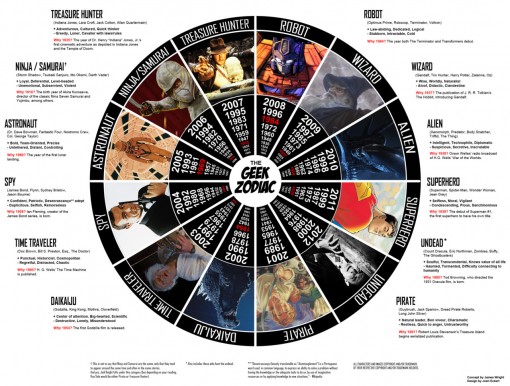 And because the fine print is a bit difficult to read:

† This is not to say that Ninja and Samurai are the same, only that they tend to appear around the same time and often in the same stories. And yes, Jedi Knight falls under this category (but depending on your reading, Han Solo would be either Pirate or Treasure Hunter).

* Also includes those who hunt the undead.

** “Desenrascanço (loosely translatable as “disentanglement”) is a Portuguese word used, in common language, to express an ability to solve a problem without having the knowledge or the adequate tools to do so, by use of imaginative resources or by applying knowledge to new situations.” – Wikipedia

According to it I am a spy and J would be a daikaiju. I wish I were a treasure hunter instead, because it looks the most fun out of the bunch.