A Book to Keep You Cool This Summer

I don’t know about the rest of the country, but we are absolutely SWELTERING here in the NYC area. Our nanny actually got a call from her son earlier today because all the local schools were closing early due to the intense heat. As I vastly prefer the cold over the heat, I usually stay indoors when the weather is like this, thankful for the wonderful invention that is central air, gorging on cool, fresh fruit and (if I have the time) reading a good book.

And what better way to stay cool in the summer than with a scary tale that chills your bones?

I am sure that every avid reader has at least one book that they can read over and over again. I have many such books, some of which are so dog-eared that I need to take extra care when re-reading them. But my all-time favorite horror/thriller book has to be Christopher Pike’s The Season of Passage — my personal copy has been read so many times that it’s practically become a part of me.

Many of my readers who have grown up in the United States should be familiar with the name Christopher Pike, as he was one of the most popular writers of young adult thrillers in the 1990s (along with the likes of R.L. Stine and Lois Duncan). I personally favored Christopher Pike above all the other authors in the genre because his style of writing is simply spectacular.

Most Christopher Pike fans are surprised to discover that he has written a few adult fiction titles as well. The Season of Passage is one such book and remains my favorite of all his books — young adult and adult — because the story is just so well-spun and well-told, and it combines two of my favorite genres: science fiction and vampires. 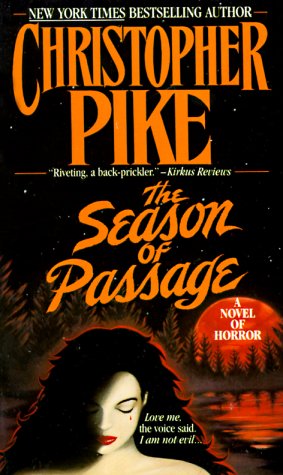 I prefer this older book cover design over the new one.

Here is a description of the book, from its Amazon page:

In 1996, the first unmanned space probe to land on Mars sent back sensational analyses (including secret pictures of huge footprints) before going dead. Four years later, the Russian crew of the manned Lenin loses contact in midmission. When the first American crew, which includes Dr. Lauren Wagner as medical officer, lands there in 2002, the mysteries expand rather than resolve, and author Pike hits top suspense with the American team discovering a Russian cosmonaut still alive in his bed in the orbiting Lenin, despite a freezing temperature in the ship. To be sure, he seemingly has no pulse and answers all questions with a fixed zombie grin that never wavers. When he leads the Americans below to comb the Martian surface by jeep and by foot, and then into a dark cave where they discover something very much like water, the reluctant reader begins shouting warnings. Meanwhile, back on earth, Lauren’s sister, 13-year-old Jennifer, begins writing a fantasy tale about her life as the Princess Chaneen, a goddess among the Asurians, which somehow ties in with the vampires of Mars and for a while takes up alternate chapters with the sf/horror tale, though sf folks may not willingly accept the fantasy novel interwoven with the main text. Only Lauren and fellow astronaut Gary “survive” the Martian ordeal and return to earth where Jennifer has killed herself–or has she? At least she’s been buried. But is the Princess Chaneen still around, to fight the vampire infection sent back to earth in the two astronauts called Lauren and Gary? Not without its ups and downs but, at its best, both riveting and a back-prickler.

If you read through the reviews on Amazon, one thing is clear: even a full 20 years after the books initial release, readers still LOVE this book and many consider count it as one of their favorite reads. As reviewer Russ writes,

What can I say that isn’t said in the fact that 147 (out of 155) reviews have given this title a 5 star rating?
And that most of the remaining reviews are 4 stars.

This is probably one of the best paperback books you’ll ever read.

I’m still surprised that the mainstream literary community has not picked up on this gem of a novel. I personally think that it would make a fantastic movie (any Hollywood execs reading this?), one that I would pay good money to see even if the screenwriter/director has butchered it to pieces.

Has any of you read this book? What do you think of it?

Can you recommend any other scary books to keep me cool in the summer heat?

« Working With Nature
The Little Sith »

13 Responses to “A Book to Keep You Cool This Summer”