In case you haven’t heard, Kim Jong Il has passed away.

(And if you’re just reading about this now on this blog, I welcome you whilst you climb out from under that rock from which you’ve been living!)

I had a brief conversation with my father about the late North Korean dictator’s death. He tells me that he is a bit worried, for there are three possible scenarios for the future of North Korea:

We will just have to pray and hope for the best.

I think that many around the world share my father’s worries, but the majority of what I’ve been seeing on the web are humor-based. Like how “Team America” became a trending term on Twitter. Or how a clip of the HORRIBLE monster movie Kim Jong Il created (after kidnapping a director) is regaining in popularity on YouTube.

Or this jem, created by the folks over at Happy Place, of what his obituary would look like if it were written by the man himself: 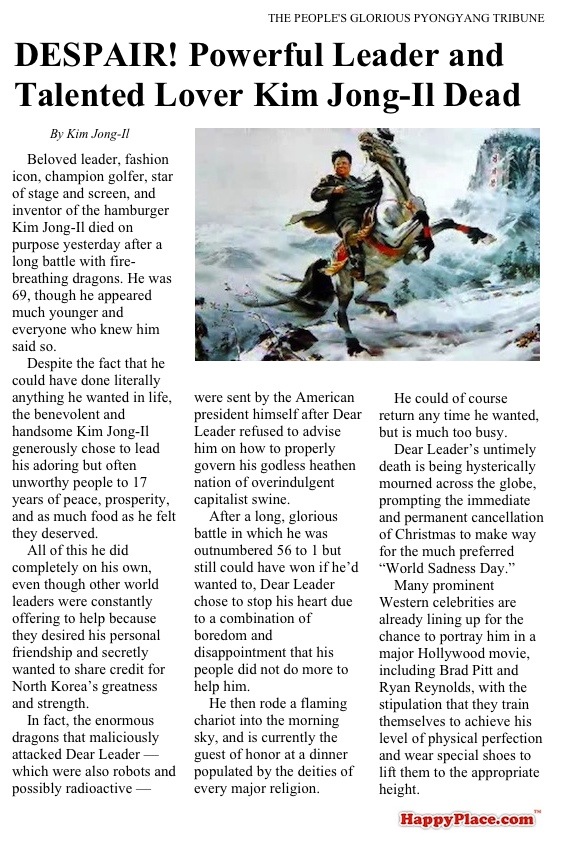 I still say that the best/funniest Kim Jong Il parody comes from the old LiveJournal blog he used to keep.

The AIM conversations he has with George W. Bush, Saddam Hussein, and Dick Cheney are stuff of legends. Go give it a read if you have some spare time — I guarantee you won’t be disappointed!