The Hidden Meaning Behind Peeling an Apple

When I was a little girl still living in Korea, I overheard that a good “test” to conduct on a future daughter-in-law is to have her peel an apple for you.

If she is able to peel the apple so that the skin remains in one piece, this indicates that she is not only adept with kitchen knives (which would presumably mean that she has spent some time preparing and cooking food), but that she is also patient and skillful.

And if the peeled skin is thin, with very little of the flesh still attached? That’s even better, because it indicates that she is not wasteful and most likely has a frugal personality. 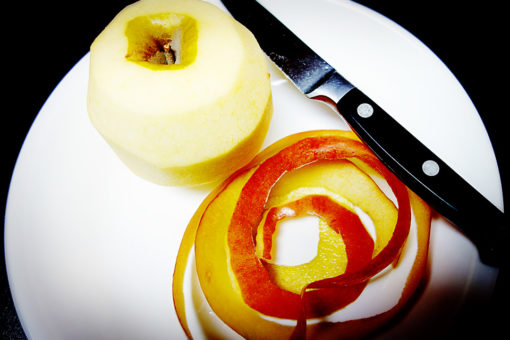 Having been a people-pleaser ever since I could remember, I took this premise to heart and began to practice my apple-peeling as soon as I was allowed to wield a knife. I knew that being able to peel an apple well is not the only sign of a good daughter-in-law, but I wanted to master the skill just in case. And I became pretty good at it, as you can see from the picture above.

(Now that I think about it, I’m pretty good with knives in general. For example, pencil sharpeners were still expensive when I entered school in Korea…so my mother taught me how to sharpen pencils using pocket knives. I sharpened my pencils using this method when I was just a wee first grader!)

Years later, I learned that having a daughter-in-law who thinly peels the skin of her apples is no longer desired. Why not? Because this would indicate that she is from a poor family! Surely a girl who grew up in a wealthy family would not care about wasting apples.

Some time after that, I heard that a daughter-in-law who can properly peel an apple is not desirable at all — because if you’re rich enough, you’ll have others who’ll do it for you!

People who grew up here in the states are always fascinated when I tell them this story. I remember that my old psychologist was especially intrigued by these theories, stating that they are outstanding examples of the psyche of an economically advancing society that places great importance on upward mobility.

Have I ever been the subject of this apple-peeling test? Well, three of my ex-boyfriends were Korean with very traditional parents. However, none of them ever asked me to peel an apple.

It’s okay, because I pride myself in this little skill. I still like to test myself sometimes, trying my best to only to peel the thinnest slices of skin, being careful not to let it break, and moving the knife faster and faster with each go.

12 Responses to “The Hidden Meaning Behind Peeling an Apple”