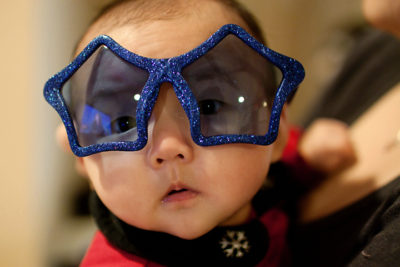 I must have looked especially haggard yesterday morning, because as soon as J woke up he announced, “I’ll take over. Go sleep. NOW.”

Knowing that the baby was in good hands with her doting father, I gathered the dog into my arms and snuggled up in bed. I took a wonderful 2-hour nap, and when I emerged from our bedroom refreshed and energized and ready to relieve J from baby duty, he assured me that everything was under control and that I should go “do my own thing.”

(Have I mentioned that I love him?)

And so I did. Grocery shopping. Watching a couple of episodes of Veronica Mars on Netflix. Surfing the web.

By the time the baby’s bedtime rolled around, I realized that I missed my daughter and took over for her bedtime routine. And I guess the little booger missed me too, because as I gave her her nighttime bottle she drank for a couple of minutes, then stopped and looked up at me.

She gurgled, smiled, then launched into a five-minute long speech.

Alright, so what she was saying weren’t words, but a series of syllables, sighs, and various other baby sounds. But I played along just the same, because it really did seem like she was telling me all about her day with daddy!

When she finally finished, I waved the bottle in front of her face and she eagerly opened her mouth. She gulped down the rest hungrily, satisfied that she was able to tell mommy all that she had wanted.

J was to go through something similar this morning. He told me that as he gave Claire her morning bottle, she stopped drinking after a couple of minutes once again.

“She needed to poop. As soon as she finished her business, she went back to drinking again.”

I laughed, and we agreed that the only things that would get in the way of our hungry baby must be the desire for girl talk with mommy, and the need to poop.