Watching little minds learn is fascinating. Even when you try your best to stay impartial and unprejudiced, you can’t help but notice the vast differences between each and every person.

Take Aerin, for instance. Now that she has officially conquered infancy and is starting to really soak in, process, react, and regurgitate what she learns, we have noticed something peculiar about her style of learning: she tends to take her lessons a little too literally.

As in, when I was trying to teach her to clap on demand using the word “박수” (bak-soo, or “clap” in Korean), I would say the word, clap, say the word again, then grab her hands to get them to clap. Easy, right? This is the exact technique I had used on Claire with no difficulties.

But when she finally made the association between the word and the act of clapping, she began to take my hands and got them to clap instead.

Only after repeatedly using the word whenever anyone clapped — over the course of a few days, no less — did she finally began to understand what I had been trying to teach her. 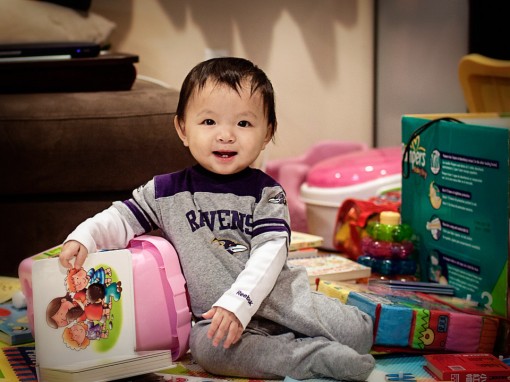 The same thing happened when we moved onto body parts.

“효정이 코!” Adding her Korean name, then pointing to her nose.

“엄마 코!” Saying umma before pointing to my nose.

“코!” Point to another nose in a picture.

I remember having done this with Claire, as well as my little cousins, to get them to learn their body parts. But once again, Aerin took the lessons too literally.

She would then grab my finger and point it at my nose.

I remember being worried when Aerin first began to play back, and interact with us. Whenever something she did deviated from what Claire had done (or what I remembered of my cousins), a little voice would shout in my head, ‘OHMIGAWD something’s wrong with my kid! Does she have some sort of disability?!? Can this be some form of autism?’

Because, c’mon. You gotta admit what she does is pretty darn adorable.