72pins is a place where “the past and present collide into 8-bit awesomeness.” Using classic NES cartridges as a canvas, various artists contribute to transform today’s popular video games, movies, television, and other pop culture references into 8-bit, NES-style art.

And, just recently, they’ve released a set of six NEStalgia by Jesse Eisemann which celebrates one of the greatest television shows in history: Arrested Development! 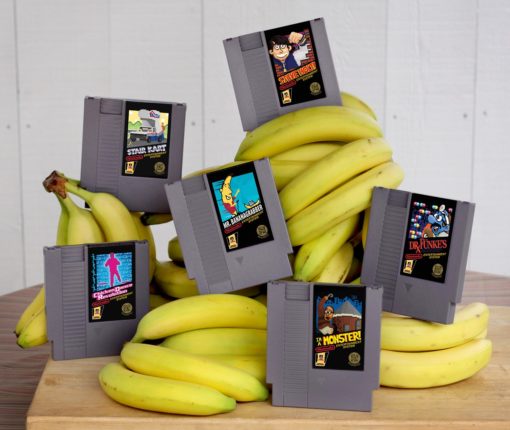 Each title is cleverly invented with games I would love to play in real life, especially since I used to be a Dr. Mario fiend and can surprisingly put aside my normally spazzy nature when doing DDR (2 mats in expert mode WHUT). Here’s the full list:

As a special bonus, each cartridge includes a QR code, when scanned, reveals an animated version of the designs. And because I know my readers can be as lazy as me when it comes to this stuff, I’ve uploaded the GIFs here for your perusal:

Each 72pins cartridge can be purchased for $15. The entire Arrested Development set used to be available for purchase for $72 (a 20% discount), but that sadly seems to be sold out.

Perhaps the best part about these pieces of art is that they’re not merely for looks. Each cartridge is a random game from the original NES lineup that still works!