I have been especially exhausted and cranky as of late. I just chalked it off to the side effects of sleep-training Claire — I was stressed out and mentally drained.

Then last week, I felt it. Nausea. Once again I brushed it off as a consequence of exhaustion.

But it didn’t go away. And on Friday, I realized when I had felt this way before: the first few months of being pregnant with Claire. Uh-oh.

I peed on a stick. I waited 2 minutes, then examined the window.

“Do you see something? Am I going crazy? I can swear that this area over here is SLIGHTLY darker. Do you see it?”

J took a look at the test and declared that I must be seeing things.

Fast-forward six days. I was getting a bit more sleep and I was less stressed (Claire’s sleep training was working!). Yet I was still exhausted ALL the time. And this morning, I gagged quite a few times while brushing my teeth.

I peed on another stick. And as soon as the control line appeared, a second line began to fade in, slowly but surely. 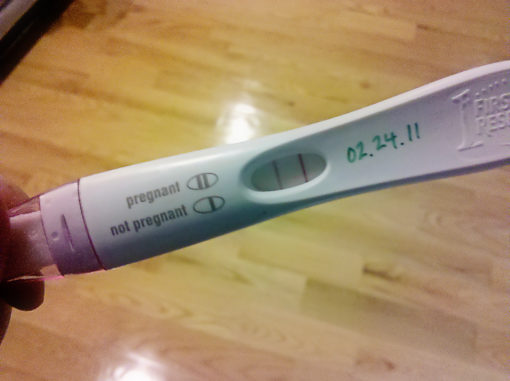 I had believed that I would burst into tears if I were to get a positive. I thought that I would feel utterly overwhelmed and helpless.

But oddly enough, I felt calm. I picked up the phone and called J.

“Well, there’s this thing called a penis. And then there are vaginas…”

He took it relatively well. In fact, he almost sounded happy, and when I called him on it, he said that he was experiencing a mix of emotions.

We decided not to tell anyone for the time being. It’s still so early (I’m only 4 weeks along, and if we go by my last period my due date is 11.03.2011 — exactly one year and one month after Claire’s due date), and we’ve already been burned once.

We’re also a bit fearful of the reaction we would receive — “What? Another one? Already?” — because truth be told, this is a surprise pregnancy that could have been prevented if we had been more careful. (Although you should know that the only way I could have gotten pregnant is if I ovulated a week early.)

A couple of hours after getting the positive result, I posted the following to Facebook:

No matter how much I try to micro-manage every aspect of my life, God always manages to step in, give me a swift kick in the butt and remind me that He has His own plans for me.

And it’s true. I honestly wasn’t sure if I wanted any more children, and if we did, I wanted to wait a couple of years.

But I guess God had other plans for us.

And I think that the reason I am being so calm and rational, and not completely freaking out, is because I know that God is in control and that He would not allow this to happen if He didn’t have faith in me.

So welcome to the world, BebeDeux (my temporary nickname for the little tyke). I hope that you stay strong and healthy in there, and that you will grow to be a wonderful addition to the family come October or November.

« How Star Wars Changed the World
Sleep Training: How We Did It »

2 Responses to “An Unexpected Surprise”