Masochistic Move of the Day

This morning I had my weekly OB visit and whined to the doctor how miserable I have been feeling lately. While sympathetic, the only advice she could offer was nothing I hadn’t heard/read before (move around as much as possible, take Tylenol or a hot bath for the pain, “It could be any day now!”).

She gave me a cervical check to see if I am progressing at all, and I was sorely disappointed to learn that I am only 1cm dilated and 40% effaced.

The doctor then proceeded to strip my membranes in hopes of speeding up the process some. If you do not know what stripping of the membranes entails, here is a visual: 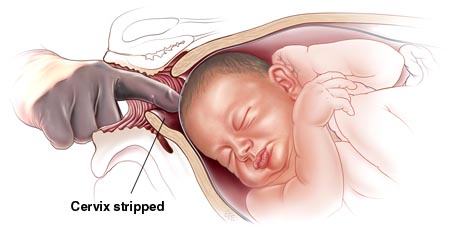 Basically, the doctor uses a finger to separate the bag of water from the side of the uterus near the cervix. The process is believed to release hormone-like substances called prostaglandins, which help to ready your body for labor. If the woman is truly near delivery, she often gets contractions as a result of the procedure.

Although stripping membranes is not considered a form of induction, the hope is that it is a form of stimulation of labor. Done too early, it has no effect, but if the body is nearly ready anyway, it can give a little jump-start to the labor process and often leads to labor within 48 hours.

If you read about the process online, most sources will say something along the lines of, “Some women may find this procedure uncomfortable.”

That is the biggest understatement I’ve heard all pregnancy.

For me, stripping of the membranes felt like the doctor had shoved a paint scraper up my vagina and did a 360 sweep of my cervix using the corners of said scraper. I was wincing and squirming in pain the entire time — the procedure itself probably only took about 30 seconds, but it felt like 30 minutes.

Later, J was to tell me that from where he was standing, it looked like the doctor had shoved her entire hand up my hoo-ha to wrestle around with my lady bits and that’s why I looked to be in so much pain.

But if I haven’t gone into labor by then, and we end up having that 40th week appointment, I will surely be asking to have my membranes stripped again. If 30 seconds of intense pain is what will help me go into labor, then by golly I will take it!

5 Responses to “Masochistic Move of the Day”

Leave a Reply to The Everyday Minimalist Cancel reply