Last night, I got to meet one of my all-time favorite authors.

I also indulged in the best fried chicken in New York.

And that was one of the most exciting things to have happened to this 6-months pregnant mother of a 9-month old in a very very long time.

The rest of the post will chronicle this action-packed evening, so this is an advance warning to those who may feel that their time may be better spent skipping the rest of this long entry. Please feel free to stop reading now.

I was first introduced to James Rollins when I picked up Map of Bones at an airport in 2005. ‘It kinda sounds like Dan Brown,’ I thought to myself as I proceeded to the cashier. While I am not a big fan of Dan Brown, he certainly writes some fast-paced, entertaining stuff…and this is exactly what I needed on my 6-hour flight.

I finished the book during that flight, and I immediately craved more. (A review I read once called Rollins a perfect mix of Dan Brown and Tom Clancy, if you want to get a feel for the type of books he writes.) For the next few months, I purchased all the other books that Mr. Rollins had written. I just couldn’t get enough.

Fast-forward to just a few months ago, when I realized that James Rollins just might have a Facebook Page and wouldn’t you know it? He does. I immediately “Like”d the page and the group (in addition to following him on Twitter) and began to notice just how involved he was in the social media world, really taking the time to interact with his fans. Being the chicken that I am, I did not post much to his Facebook pages or reply to his tweets, but I did manage to build up the courage a few times and couldn’t contain my excitement when he actually replied to some of my comments!

This is how I found out that James Rollins would be on a tour to promote his latest book, The Devil Colony, and that he would be making an appearance at the Mysterious Bookshop in New York.

The rain started almost as soon as I left the house, and continued through the night. And let’s not forget that I was traveling at prime time rush hour — on a Friday evening in mid-summer, no less — the traffic was horrendous. Add that to the fact that I had only slept 3 hours the night before, so I was tempted to just turn back home on more than a few occasions.

Then, as I arrived at the parking garage where I had made “reservations” via Best Parking (there was no way I was taking public transportation in the heat, rain, and humidity while six months pregnant…at least not when we have a car) I wanted to scream as the attendant told me that the lot was full. All the other parking garages would cost me about $10 more.

Fine. I told myself. I found another lot and hurried through the rain to my destination, getting drenched in the process. As the book signing was part of Harper Collins’ ThrillerFest and I knew that a bunch of authors would be in attendance, I wanted to get there as early as possible in order to avoid crowds.

As much as I am a bibliophile, I had never been to a book signing before and I had no idea what to expect. I knew that most book signings consist of the author reading excerpts from their latest and greatest, a Q&A session, and/or fans waiting on a line to get the author’s John Hancock inscribed inside the book.

Suffice if to say, this was not a typical book signing. I had expected tables where authors would be signing books — there were none. Instead, everyone was just mingling and talking…they even had snacks and free booze! (Later, I was to discover that this was actually a reception held by the Mysterious Bookshop in honor of ThrillerFest.)

I spotted James Rollins almost right away, but I was too scared to approach him. Instead, I stood in the shadows like an idiot, like I was expecting him to just saunter over and introduce himself. I saw that the woman next to me was clutching a Rollins novel, so I asked her what we were “supposed” to do.

“I don’t know. This is my first book signing too!” she whispered back.

After grabbing a drink (no beer or wine, just water) and stuffing my mouth with some crackers, I managed another few minutes of acting like I knew what I was doing…then I noticed that a crowd was starting to form around Mr. Rollins.

I knew that it was now or never.

There was definitely no line. Fans stood around him in a large semicircle, and he just greeted each one by one, taking time to answer questions, sign books, and take pictures.

I was a bit too timid and let a bunch of people go ahead of me — people who, if there was a line, would have definitely been behind me. After about fifteen minutes of this, Mr. Rollins became proactive and actually turned towards me (!) and invited me forward.

I acted like a complete idiot. I gushed about how I love his books (my favorite of all his books, Amazonia, is his favorite too!), how BebeDeux was kicking the entire time I was reading his new book, and how I have converted my husband — who usually hates to read — to a fan too.

When it came time for him to sign my book, he asked me my name in order to personalize it…and as I spelled out “H-Y-O-J-I-N” he asked, “And your last name is Hwang, right? Middle name Jenny?”

He continued, “I thought I recognized you from your Facebook profile picture. Your name is a hard one to forget, and I definitely remember you from Facebook.”

I handed over my camera to another fan and got the photo below. (Thank you for making the picture so blurry, lady. And I knew I should have brought my DSLR, not my crappy point-and-shot.) 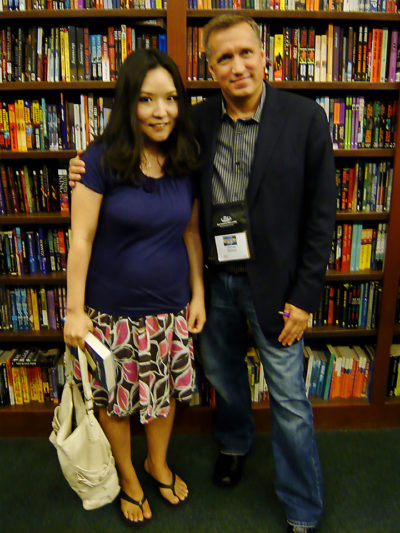 When he asked me how far along I was and whether I knew the sex of the baby, I blurted out that I had considered naming BebeDeux’s middle name Seichan, which is the name of one of the characters in his “Sigma Force” series. I think I may have freaked him out a little by this, but he took it all in stride and just let out a hearty laugh.

My other thoughts on James Rollins? I could tell that he was remarkably sharp and very intelligent (he actually used to be a veterinarian before becoming a writer full-time), a bit reserved but quite charming at the same time. He was also incredibly sweet and considerate of all his fans. Some of them brought multiple volumes for him to sign, and he took care in personalizing and adding little notes to each one. (He had written in mine, “Great meeting a Facebook friend in person!”)

When my “meet and greet” was over, I walked around the bookstore for a few more minutes to gather my composure. (I had just met a real-life celebrity…a NYTimes best-selling author, no less…and he remembers me from Facebook!) I then headed back out into the rain and stood under an awning while I ordered our dinner for the night. I had a specific place in mind, you see…

Lately my sister and her friend had been raving about a Korean-style fried chicken place called MONO+MONO. My sister had told me that if I were to go, I had to have their bulgogi sliders too.

So after placing my order, I made the trip from TriBeCa to the East Village where I circled around the restaurant only a couple of times before finding street parking (score!).

As soon as I entered I loved the vibe of the place. (Their tagline is, “The Best Korean Fried Chicken seasoned with 30,000 Vinyl Jazz Music in NYC”) It was clear that it wasn’t just a fried chicken place…it was a restaurant-bar-lounge in one. Take a look at their decor: 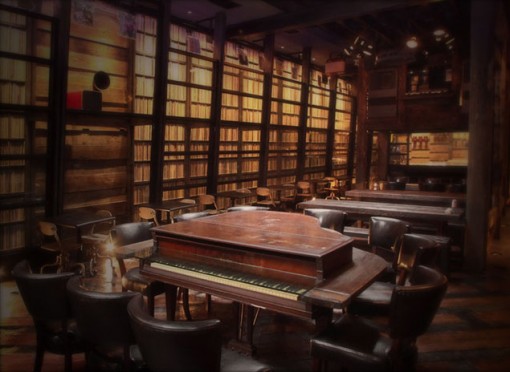 I have also heard (and confirmed via their website) that every Sunday – Thursday, their happy hour special consists of all-you-can-eat wings and 10 beers for just $20.

In other words, it is definitely a place J and I would have loved to frequent back in our pre-baby days.

My take-out order was waiting for me when I walked in. The smell of the chicken was killing me on my drive back home, but I managed not to scarf down any wings in the car and ordered J to tear open the boxes as soon as stepped through the front door.

The verdict: THE best fried chicken in New York. Seriously. Some people say that their soy garlic wings taste too much like BonChon/Kyochon’s, but my sister and I can tell the difference in the slightly more garlicky taste (which is always a plus for garlic lovers like me) and the thinner, crispier skin.

I really, really liked the bulgogi sliders too. I think it might be a seasonal dish because it’s not on their menu online, so I’m forever grateful to my sister who told me that I should order it. To quote HIMYM, “I love this burger so much I want to sew my ass shut.”

So that was my exciting night.

Yes, it ended before 9pm. Yes, I realize that it wasn’t that special compared to most other people’s lives.

But to this mommy, it was one that brings a smile to my face.

(And a big thanks to J for working from home that day and watching over Claire so that I can go out early that night!)

« The First Search Engine and the First SEO
Smile Band-Aids »

13 Responses to “My Exciting Friday Night”