Our Second Trip to the ER

Sunday night. (Or Monday morning, if you prefer.)

I woke up at around 2 a.m. with some pain in my lower right abdomen. I got up to pee — which is not unusual these days — and went back to bed. “The pain will subside,” I told myself. “You’ve been having tons of pregnancy-related twinges, pangs, and aches over the past few months. It’ll go away.”

By 2:45 a.m. the pain had gotten so bad that I was thrashing around on the bed. And no, J didn’t wake up because he’s the world’s deepest sleeper which has me convinced that I’ll be doing all the 3 a.m. feedings by myself when the baby comes.

I finally couldn’t take it anymore and poked him. Then pushed him…and shook him until he finally woke up.

He got up, put on some clothes in record time and hauled our asses to the hospital. 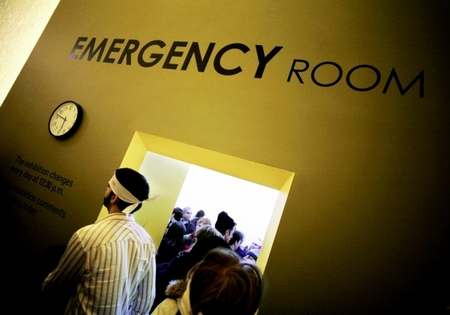 One thing I learned from our last ER visit was that they do not have doctors and nurses running around in blood-stained scrubs, yelling things like “Stat!” like they do on medical dramas. It’s a fairly calm affair —

— unless you’re in excruciating pain, that is.

By 3 a.m. the pain had gotten considerably worse. It had started as a dull, throbbing ache but it was now a full-on sharp, STABBING sensation that ceased to stop. Not only that, the pain had spread to my sides and back as well, forming a U-shaped band of agony around the lower right side of my torso.

How bad was the pain?

At its worst, I had trouble breathing. I had tears running down my face and was dry-heaving (and am certain that I would have been puking if my stomach was not empty). I was shaking so much that the nurse had trouble putting in the IV.

There were people in the ER who were more vocal about their discomforts than I. So J had to go grab the nurses on more than one occasion and angrily ask what the hell was taking so long to get his pregnant wife some help.

Someone finally arrived with a vial of morphine. Can I just say, that sh*t is DOPE? I can now understand how so many people can get addicted to narcotics.

When my pain had finally subsided — or more accurately, been masked — and everyone started talking reealllly slooooowww and things became fuzzy wuzzy, they finally announced that the ultrasound tech had arrived and was ready for me.

I did not like the ultrasound technician. (And this is saying a lot coming from a patient who was high and happy on morphine.) He had bad bedside manners and kicked J out of the room. He wouldn’t even show me the screen, and when I asked if the baby is okay, he gruffly replied, “It’s moving.”

He performed a full abdominal ultrasound which took a good 20-30 minutes. I was then wheeled back to my bed and awaited the results.

When the on-call OB arrived, imagine my surprise to see what it was one of the doctors from my OB practice! He said that all my bloodwork looked normal and that the radiologist couldn’t find anything abnormal on the ultrasound.

He said that the most likely culprit is severe round ligament pain (RLP). HOWEVER, there was still a chance that it was appendicitis.

He explained that although my appendix didn’t look inflamed from the ultrasound, they couldn’t be sure without a CT scan (which they are reluctant to perform on pregnant women). For the time, they will rule it out since I didn’t have a fever and my white blood cell count wasn’t elevated.

Thankfully, the baby was doing just fine and didn’t seem to be in any danger.

The morphine had started to wear off and my pain hadn’t returned, so they decided to discharge me. If I continue to experience the pain, I was to call the OB office right away.

I spent all day yesterday recovering. The pain would come and go in waves, but it hasn’t been as bad as before.

I called the office when I became concerned that the pain wasn’t going away, but the on-call OB agreed with the other doctor that it is most likely RLP for which, unfortunately, they can’t do much. Severe RLP (like mine) is rare, but not unheard of. I just happen to be one of the few lucky women who has been blessed with it.

The bad news is that there is a chance I will continue to experience RLP for the duration of the pregnancy, or even after!

However, I take solace in the fact that the baby is doing okay. Even if I have to experience RLP every day until she is born, she’ll all be worth it. I even joked to J, “Well, she’s really making me work for her, isn’t she? At least I’ll appreciate her that much more when she’s born!”

I’m still in some pain as I write this. Mercifully, the pain seems to be lessening with each wave.

Please keep me and the baby in your prayers.

« Would You Contest This Ticket? How About Hiring...
That Flippin' Clock! »

10 Responses to “Our Second Trip to the ER”