A couple of days ago, a reporter from the AP contacted me (having read my thoughts on the issue here on this blog) and asked if I would like to be interviewed for a story she was doing on America’s reaction to the death of Bin Laden.

Unfortunately, my comments were edited out of that article. But later that day, another AP reporter — this time, a national reporter — contacted me for the same reason.

And the article was published tonight. You can see it on Yahoo! News and other internet news sites. 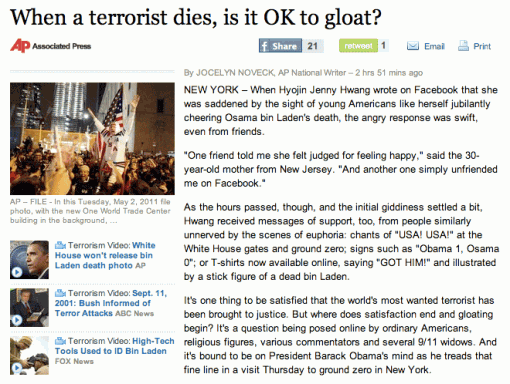 Although Ms. Noveck made my experience a bit more dramatic than I believed it to be, I do not regret giving the interview and I am happy that my voice was heard.

Yes, most of the comments on Yahoo! seem to be in strong disagreement with my stance, some even insulting me and/or assuming false things about me (eg, not having directly been affected by 9/11 or the war when I know someone who died in the second tower and have a friend who was seriously injured in Afghanistan).

But a few people actually took the time to look me up and send me messages in support of my view, and because their messages were thoughtful and kind (a few obviously having taken some time to write), it genuinely warmed my heart and gave me encouragement. So to those people, thank you.

In light of the overwhelming response I have been receiving, there are some things I would like to make clear…

And that is all I would like to say on the matter. Thanks for reading.

« Three Things
Another Reason to Switch to Chrome »