J and I have loved the hit ABC show Modern Family ever since my sister introduced us to it mid-first season.

And over the past summer, as we patiently waited the new season by re-watching reruns, something began to dwell on us… 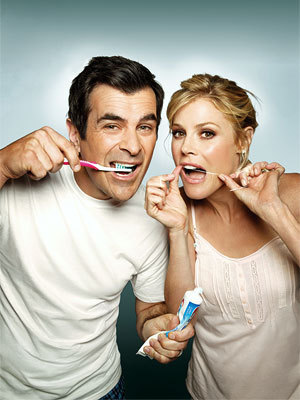 And the more and more reruns we watched, the more the similarities became uncanny. Phil’s goofy, sometimes-immature self, his desire to please everyone (even sometimes at the expense of his wife), his wanting to be hip and cool for the kids, and even the way he procrastinates on the various to-do items that Claire lays out for him are exactly like J.

And Claire? Her OCD-nature and the tendency to FREAK OUT over minor things, her desire to make everything and everyone perfect (even if they are, in their own ways, already so), her needing to have complete control over all aspects of her life and being too hard on herself when things do not go her way…

Yep, that’s me in a nutshell.

With every interaction they have, with every memorable scene they are in together, we can totally see ourselves doing the same exact thing, or we have done the same!

The funny thing is, we decided on the name Claire for our firstborn right before the show began to air. Another coincidence? Claire and Phil have three kids: two girls who are close in age and a third, a boy, who is younger by a few years. Will we end up having a third child, a boy, some years down the road?

(And I know that if we end up naming the boy Luke, J will make sure that the first words that Luke hears out of the womb are, “Luuuukke. I ammmm your father…” JUST like Phil did.)

The similarities between this TV couple and ourselves are so striking that J’s brother continually tells his wife, “Ohmygawd, I feel like I’m watching my brother and Jenny!” whenever they watch the show.

What about you? Are there any fictional characters — on television, in movies, or in books — that you and your significant other resemble?

« Cloudy: The Good and the Bad
Why Cleavage is Bad for Crime Fighting »

7 Responses to “Claire and Phil Dunphy: Our On-Screen Selves”