A few days ago, Claire told her first lie.

She and Aerin were playing together when Claire got angry over something, grabbed the toy in Aerin’s hand, and threw it.

And when J approached her to remind her that she shouldn’t throw things, she outright told him that it was Aerin who threw the toy!

Both J and I had witnessed the entire event from start to finish. When J asked her, “Did you mean that you threw the toy?” She denied it and told him once again that her little sister had done it. 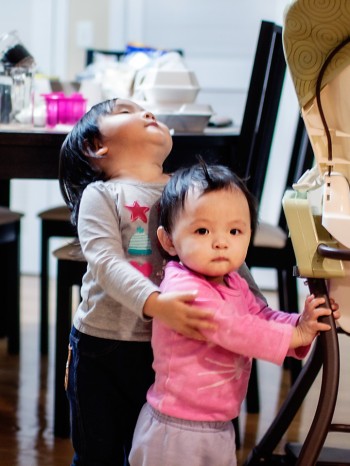 I told Claire to give her sister a hug before I took this shot.
Obviously, my timing was off.

While J scolded her and explained that she shouldn’t lie, I turned to the interwebs to see how we should deal with a child’s first lie. That’s when I happened upon this Scholastic article:

The first successful lie can be pegged as a developmental achievement because it marks the child’s discovery that her mind and thinking are separate from her parents’.

And as with most milestones in Claire’s mental and emotional development, she seemed to be a bit ahead of the curve. (She is 25 months old.)

We didn’t know if we should be angry or proud.

I continued to read up on the subject, and learned that at this age, Claire probably does not know that lying is wrong, so there is no point in trying to drill moral values into her. The best thing we could do is explain the consequences of telling a lie (as well as other morally questionable acts), and become models of good behavior ourselves.

And until her conscience matures, we should try to discern what message she’s trying to convey with the lie.

She has recently begun to trick us too. For example, after we put her to bed last night, she called for me once again. She told me, “Umma peepee” which means that she needs to go use the toilet. (We’ve been potty-training her and she’s doing pretty well so far!) So when I lifted her from the bed and opened the door so that she could go to the bathroom, she instead made a beeline for the living room, giggling and gleefully running the entire way.

She then sat herself down on the couch, looked at me with a big smile on my face, and said, “엄마 앉어!” (“Umma anjuh,” or “Mommy sit”) She obviously wanted to play, not go to bed.

I always knew Claire would be a crafty one.

« The Geek in Heels’ Favorite Beauty...
Drinking in LA vs. Drinking in NYC »