My cousin told me that when her daughter first entered preschool, and her teachers were attempting to teach her the concept of “sharing is caring,” she began to use it for her own advantage.

In other words, whenever she saw another child playing with a toy she liked, she would march on over, tell the poor kid, “Sharing is caring!” and take the toy for herself!

Since Claire and BebeDeux will only be 13 months apart in age, we have been hoping that they will learn to share at an early age without much intervention from us. But recent events are leading me to believe that perhaps Claire is already starting to grasp the idea…

A few days ago, as Claire sat on the couch playing with her toys, she got ahold of a nearby container of puffs and pried it open.

Since a bunch of the puffs spilled onto the couch before I could get to her, I decided that she might as well eat what she had spilled before I attempt to clean the mess.

Now, long time readers will know that one of the reasons we love Comang is due to his lack of interest in human food. Even if we place a plate of ribs in front of him, he will just sniff it and let it be (see the proof here).

This has changed in the recent months, as Claire began solids.

Don’t get me wrong — Comang still leaves J and my food alone. It’s just that he has developed a taste for Claire’s food (perhaps because so much of it ends up on the floor?): congee, Mum-Mums, puffs, and other various snacks. It is not unusual to find him following Claire as she buzzes around in her walker, dropping snacks in her path, or lurking under her high chair waiting for food to rain down from the sky.

(Sometimes, we will even call to him after Claire has finished eating to “vacuum” the mess on the floor.  :-P) 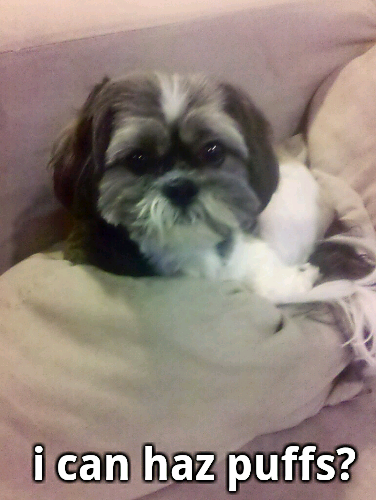 My new cell phone will arrive Wednesday. Until then, you will need to
continue to put up with my current one which takes bad photos.

Back to the story.

As soon as Claire began to eat the puffs on the couch, Comang walked on over and sat next to her, giving her his “please feed me” look.

And to my amazement, as Claire picked up the next puff, she handed it over to him!

Comang is still a bit scared of Claire, so he wouldn’t take it directly from her hand. Instead, he would wait until she dropped it in front of him, then gobbled it up.

Then can you guess what happened?

Comang, who was clearly not satisfied, gave Claire a “I want more” look.

Claire then grabbed her pacifier and tried to give that to him!

I could not stop laughing. At Comang’s reaction (which was a look that plainly stated, “What the heck is that? I don’t want that crap!”) or at Claire’s obvious confusion at his refusal of the pacifier.

As I’ve stated before, this tenth month of Claire’s life has definitely been the most fun. I can’t wait to see what’s in store for us next.

17 Responses to “Sharing is Caring”