Things I Have Learned While Trying to Get Pregnant (Warning: Entire Post is TMI)

I have been poring over pregnancy, miscarriage, fertility, and TTC (trying to conceive) boards for the past few months. Here are a few things that made me go “huh” while clucking my tongue in (disgusted) surprise:

1. The woman’s body is (usually) a toxic environment for sperm.

The vaginal vault has a very low pH (acidic) of about 3 or 4, while sperm only thrive in alkaline environments (such as semen, with a normal pH of 7.2-7.8). That means that my body is prepared to kill J’s little swimmers within an hour or two of entering my body. Good to know! 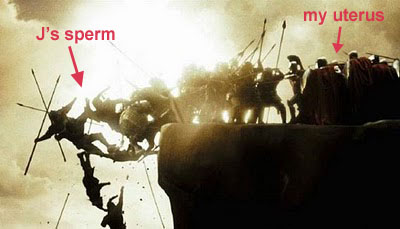 The good news is that right before ovulation, a woman’s cervical mucus will turn alkaline and will create a more “friendly” environment for sperm.

(This type of cervical mucus is referred to as EWCM in baby board speak, or “egg white cervical mucus.” It looks like, and has the consistency of egg white: clear, thick, and stretchy. Have I grossed you out yet? Wait, it gets better as we move on.)

The bad news? This only allows for a maximum 5 days (it is usually closer to 2-3 days) every cycle for me to get knocked up.

2. In case you were wondering, there is a way to differentiate between semen and EWCM.

When I first read about the characteristics of EWCM, the first though that popped into my head was, “Hmm that sounds a lot like my hubby’s spunk.”

So how does one tell the difference between EWCM and semen leaking out of your hooha when you’ve been doing it like rabbits trying to conceive?

EWCM is very elastic. When you put it between two fingers, it will stretch without breaking apart, while semen will break apart almost immediately.

EWCM is clear while semen is a bit cloudy.

EWCM will form a ball in water. Let some drop into the toilet: if it balls up and sinks, it is EWCM. If it dissolves, it is semen.

And from my personal experience, semen smells like bleach. (Don’t tell me I’m the only girl who’s noticed this phenomenon.)

3. You can increase your chances of having a boy/girl by… 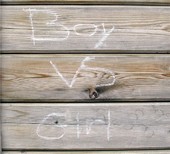 It usually takes 15-30 minutes for sperm to reach a woman’s fallopian tubes, where fertilization takes place. However, sperm can live inside a woman’s body for up to five days.

So with all this in mind…

If you want a boy, have sex on the day before and the day of your ovulation. This will allow the faster male sperm to get to the egg first.

If you want a girl, have sex 4-2 days prior to ovulation, and abstain from sex two days before and one day after ovulation. This will allow the slower, longer-lived, female sperm to be ready for fertilization when ovulation does occur. However, keep in mind that conceiving a girl can be more difficult since you are abstaining on your peak fertility day.

4. You are not extra-fertile right after giving birth, a miscarriage, or going off the pill.

This is a myth, perpetuated by the high reports of surprise pregnancies among women in these situations.

Think about it: after a birth/miscarriage/going off the pill, your hormones get all out of whack. Your body goes into overdrive trying to regulate itself again, and while the surge in certain hormones may help some women get pregnant again, it does not make everyone a super baby creating machine.

Meanwhile, your ovulatory cycle is most likely off so you can’t time the days you have sex. It is only natural that there is a high instance of surprise pregnancies for women who have just given birth, suffered a miscarriage, or recently went off the pill.

5. There is a sh*tload of things you can do to increase your chances of getting pregnant —

— but nothing that will knock you up.

So far I am only charting my BBT (basal body temperature) and have started taking baby aspirin every day. And based on my BBT chart, I am pretty certain that I ovulated this past Sunday…but at this point all we can do is wait under the end of the month.

I remain hopeful that this time will be it.

If it isn’t, I am prepared to pull out all the stops. Vitamin B6. Evening Primrose Oil. Pre-Seed. Progesterone. The Clearblue Easy Fertility Monitor. Even charting my cervical mucus, when the mere idea of it grosses me out.

Or I could just give up, start birth control again and start drinking 6 cups of coffee a day while chain-smoking. Because that’s when everyone else seems to get pregnant, no?

41 Responses to “Things I Have Learned While Trying to Get Pregnant (Warning: Entire Post is TMI)”