I am happy to announce that, at 15 months of age, Claire has finally started walking.

Let me rephrase that. She has finally started walking without support. Because she has been walking with one hand against the wall or along some furniture, or one hand holding someone’s hand, for over a month now. We all knew that she could physically walk by herself, but that she was too afraid to let go.

Then, just this past weekend, BAM! It’s like she suddenly happened upon a chest full of courage and started walking everywhere by herself. 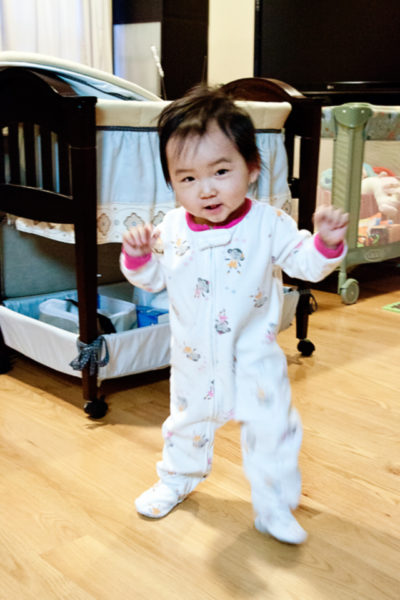 I have been so proud of our firstborn lately. Everyone tells us that she’s one of the smartest babies they’ve ever met, and even I get amazed by her quick wit and intelligence from time to time. (I get worried too, because I just know that she’s going to outsmart me and her father…she’s already playing mind games with us and trying to pit us against each other to get what she wants!)

She has not exhibited any signs of teething since my last teething update — and she now has 13 teeth, 5 of which are molars, aka the most painful to sprout. She follows instructions — such as “Take your feet off the table” or “Go throw this away in the trash” — and is also doing splendidly with all three languages we are teaching her. (I stopped keeping track of her words after about the seventh one…I think she knows about twenty now? Should I be keeping better record of this?)

I wish that I could get some videos of her favorite activities, such as identifying different parts of her body, singing and dancing along to songs, and interacting with Aerin, but she is OBSESSED with our Flip videocam and will stop whatever she is doing to try to get her hands on it. She is also fascinated by our camera; hence the lack of photos of her as of late.

Claire’s love for her little sister is so stinkin’ cute. She now calls for Aerin instead of her dad every morning when she wakes up. (“Beh-bee? Beh-bee?!???”) She insists on coming over to help us burp Aerin whenever she sees us prop her up after a bottle. She visibly gets upset when Aerin is crying, and will gently pat her, shove a pacifier in her face (sometimes even the one that she’s using!), or point to the kitchen and yell “Mum mum!” (her current word for all food) as if to remind us that we need to feed her little sister. 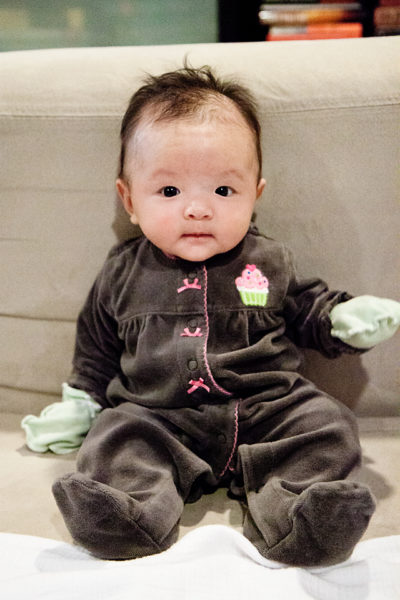 How can you NOT love this face?

They say that motherhood never really gets any easier, that each new level of development brings with it a unique set of challenges. I wholeheartedly agree, because while I love each new stage of Claire’s life more than the last, it’s also so much harder. I had believed that Aerin would be more difficult of the two because a newborn requires so much work, but I was wrong.

Because chasing after a toddler, trying to find the best ways to entertain her and educate her and discipline her, is soooo much more exhausting than getting up every 3 hours for a feeding.

Let that be a lesson to all mothers of one young child who are contemplating a second, and who, for some reason or another, believe that the new baby will be the harder one. No — it is your first who will be the more demanding one as he/she continues to mature and discovers new ways to challenge you.

This is not meant to scare those who are thinking about having another kid. Rather, it is my way of encouraging you, to let you know that nothing really comes as a surprise with second (and subsequent) children.

21 Responses to “Walking Without Support”