28 Weeks (And My Waxing Experience at Bliss)

Where did the 27 Weeks update go? Yeah…um…about that…

Did that work? Yeah, I didn’t think so. Just blame it on the fact that I can be a moron and completely forgot to take a picture, nevermind write an update, last week. Sorry about that.

There is some debate on when the third trimester officially starts — some say at the 27th week and others say the 28th. Whatever the correct answer may be, I am now officially in my third trimester and have started my seventh month of pregnancy. And as you can see below, my tummy has grown considerably in just two weeks. (Holy mirror spots, Batman! Remind me to wipe the mirror clean before taking next week’s picture!)

I managed to take a measurement of my waist and…it’s not pretty. Before pregnancy I usually hovered between 26″-27″. My waist is a whooping 40 inches now. Seeing the actual number made me feel like crap because I know women whose waists were 40″ right before delivery.

My weight gain is now at 30 lbs too. With 2.5 months left to go, I have a feeling that my total weight gain will hover around 45 lbs. Not good. However, I made a promise to myself that I will not stress too much about my weight gain and start exercising as soon as possible after birth. I’ll be returning to my trusty Jillian Michaels and will join J on the P90x.

Last Friday we had our monthly checkup and the doc reassured me that the baby is doing perfectly fine. This was also the day I took my 1-hour glucose test (the sugar drink wasn’t nearly as bad as everyone makes it out to be…it tasted like flat orange Fanta), and I’m assuming that I passed because they said they would call me if anything was wrong.

The best part about last week’s appointment? We found out that the baby had moved head-down! Both my mother and I had been praying that she would flip around ever since we found out she was in breech position, so we were both overjoyed at the news.

Baby girl remains very active. Sometime starting in the last week, I have been able to feel her slow movements as opposed to just her kicks and jabs. It’s a funny feeling whenever she presses up against my belly and rolls around…I’ve been starting to play the “which body part?” game in my head every day since. This is probably my favorite part about being pregnant: being able to feel my baby moving inside of me. I’m really going to miss it once she is born. 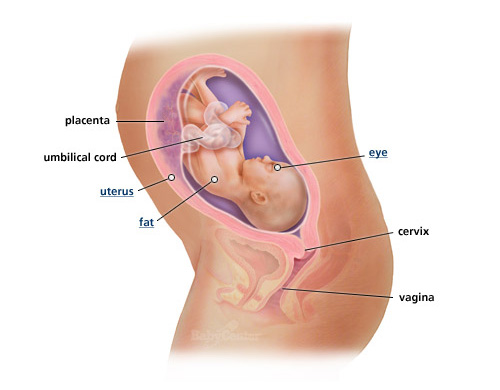 New York is having one of the hottest summers in almost a decade. As a result, I try my best to keep indoors in the A/C as much as possible. The heat certainly isn’t helping with the swelling either. I now wear flip-flops if I’ll be out during the night (when my feet swell the most and I can no longer fit comfortably into my regular shoes), and my wedding ring JUST barely fits.

Grooming myself is starting to become a hassle as well. I had stated earlier that I’m already having trouble wiping after taking a deuce. Shaving my legs is also starting to get difficult. Luckily, J has agreed to start doing that for me when the time comes. However, shaving my bikini line has become a complete freak show. And I refuse to let J shave me down there.

So I decided to get a wax.

I have never gotten a bikini wax before (I was always content with a razor), so I was a bit nervous to say the least. In addition, everyone says that it is at least 3 times as painful when you are pregnant, so I really had to question myself if I were being crazy.

However, I just didn’t feel clean anymore and it was really bugging me.

I had heard that the special strip-free wax that Bliss uses is one of the best and least painful, so I booked an appointment at Bliss Hoboken and went in today. I had explained to the receptionist that not only is it my first time, I am also pregnant so she booked me with one of their most popular waxing specialists: Jenna.

Let me just tell you — Jenna was THE BOMB. I don’t know what possessed me, but I had decided to go for the full monty and chose the brazilian…but then started to freak out about it right before we got started. However, Jenna helped me relax, kept the conversation going to keep me distracted, and really made this first-time waxer feel comfortable. As for the pain? Sure, there was some. But it wasn’t nearly as bad as I had expected and I wondered to myself several times why I had never done this before. The wax was THE perfect temperature, and what they tout is really true: their special wax only sticks to your hair (not your skin) so I barely even felt the “do-overs” that were done to catch the stubborn strays.

Jenna told me that she has pregnant women come in all the time for brazilians, up to just days before their due dates (one even came in the morning of the day she was to be induced!). I am loving the waxed feeling so much that I plan on doing the same. Seriously…why haven’t I ever done this before?

« 15 Things Your Didn’t Know About Star Wars...
I Write Like Stephen King »

15 Responses to “28 Weeks (And My Waxing Experience at Bliss)”