I now have less than 10 weeks left until my due date! But when you think about it, I’m only 3/4 of the way done, which makes me think with an exasperated sigh, “That’s it??”

The impatient side of me wants this baby out NOW. The discomforts of the third trimester continue, and I really really envy friends like Shortie who went into labor yesterday (and probably had her baby by now!), or Sara who is now full-term. I even envy those like Creature Gorgeous who is simply GLOWING and basking in all the comforts of the second trimester.

Then the good, motherly instincts kick in and I try to persuade myself that the longer she cooks in there — up to 42 weeks — the healthier she will be when she is born. I read an article the other day that the majority of advanced prenatal brain development occurs between weeks 35-40…and we want a smart baby, y’all!

Earlier this week the baby’s crib was finally delivered. We had forked over an extra $130 for delivery, and while we had been questioning whether we could’ve just rented an SUV or a truck to pick it up ourselves, I’m ultimately glad that we decided to go the delivery route — the box is HUGE!

As ugly and intimidating as the big-ass box may be, it still sits unopened and untouched in our foyer because I have yet to start cleaning out the guest room. Sigh. I keep seeing pictures of fully-prepared nurseries in my pregnancy boards, even by women who are due months later than me, and I feel so unprepared and guilty that I’m soooo not looking forward to decorating our daughter’s room. I guess I just don’t have that gene in me? I would rather keep it bare and sparse and let her decorate it the way she likes as she gets older.

There continues to be no more major milestones on the baby’s development front. At this point, all she needs to do is continue to build up fat and make those bones stronger. I read that starting in the third trimester, 200 milligrams of calcium are deposited into the baby’s skeleton each day. Now I’m not sure if this is psychosomatic, but I almost feel like she’s taking some of that extra calcium from my own deposits. Because for the first time since finding out that I was pregnant, I broke a few nails in the past week. Super-strong nails was one of the things I actually loved about being pregnant, but now it seems that my nails are starting to go back to their usual weak, brittle state. 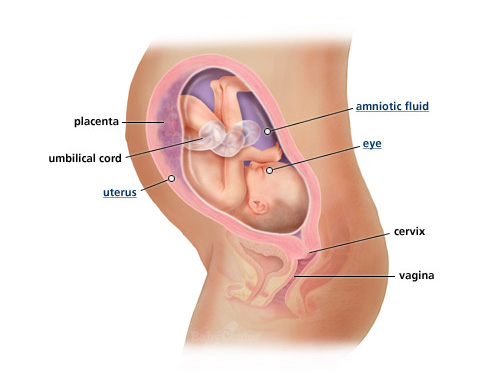 As for the minor developments, the baby’s fingernails and toenails are now fully finished. Her bone marrow is completely in charge of red-blood-cell production now, and she is starting to shed her  lanugo — the downy hair that was covering her skin — as she’s chubbier and better able to regulate her body temperature.

I read today in one of the many pregnancy e-newsletters I receive that at 30 weeks, my baby is now the size of a chihuahua. I burst out laughing as soon as I read that, because I couldn’t help but picture myself giving birth to one of the toy breeds that Comang seems to be so terrified of.