Yesterday, I read an article in USAToday stating that the recent wedding of Chelsea Clinton, a Methodist, and Marc Mezvinsky, a Conservative Jew, reflects the growing rate of inter-faith marriages in the US. 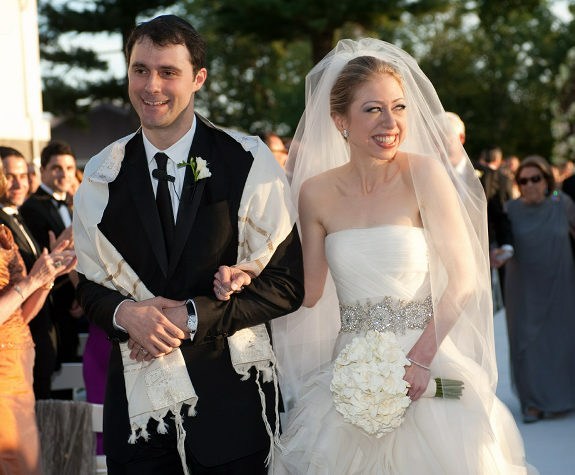 Congrats to the happy couple — Chelsea Clinton looks to be positively glowing…and what a gorgeous gown!

According to the article:

Two decades ago, 25% of U.S. couples didn’t share the same faith. That was up to 31% by 2006-08, according to the General Social Surveyby the National Opinion Research Center at the University of Chicago. The number was even higher, 37%, in the 2008 U.S. Religious Landscape Survey by the Pew Forum on Religion & Public Life. Both surveys included people who crossed major traditions, such as Jewish-Protestant, believers married to the unaffiliated, and Protestants of different denominations, such as former president Bill Clinton, a Baptist, and Secretary of State Hillary Rodham Clinton, a Methodist.

Seeing that the latest date in the excerpt above is 2008, I’m guess that the number of inter-faith marriages in the US is even higher today — perhaps at about 40% based on the trends above.

With this data in mind, I can’t help but wonder…how important is sharing the same faith (or lack thereof) when deciding to tie the knot?

To me, it is very important. My faith affects everything from the very definition of marriage to why/how I resolve conflict to where we spend Sunday mornings.

J’s family is atheist, but he attended a Baptist boarding school in England and so learned about Christianity through the mandatory services and other Christian-based procedures practiced by the school. When we started dating, he was not a church-goer, but considered himself a Christian. As such, he had no problem when I suggested that he start attending church with me.

However, my husband and I started as different denominations: he was a Baptist, while I was raised and remain a Presbyterian (PCA, not PCUSA). And although he agreeably accompanied me to my church, he was bewildered and a bit shocked at the different worship styles (the British Baptist style of worship is very traditional, with set rituals, organs and hymnals while I am used to the American contemporary style of worship) and the Calvinist concepts of predestination and total depravity.

In addition to denominational differences, I cannot say that we were on the same page — spiritually speaking — as I have attended church regularly all my life and like to think that I have an intimate relationship with God. J believes in the basic tenants of Christianity but has yet to form a fully devoted connection with his faith.

Despite the differences, I love the fact that my husband is willing to learn and receptive to a more intimate relationship with God, as well as to my denomination. I love that he agreed to pre-marital counseling through the church, and wants to raise our children as Christians. I also love that he is willing to forgo Sunday afternoon NFL games to attend church with me.

So while marrying a Christian man was extremely important to me, the different denominations and dedication to our faith was not too big of a problem in our case.

Still, the fact remains that I could have never married a non-Christian. This isn’t to say that all inter-faith marriages are doomed for failure; I just could never do it myself. Just like people with strongly opposed political views, or even a dedicated vegan marrying a meat-lover, there are couples out there who make it work. However, I believe that if your beliefs are that strong and that important in your life, you need to find someone who compliments and accepts them and lives to build you up in them.

What do you think? How much of a factor does faith play when choosing a marriage partner? Are you and your spouse/SO on the same page when it comes to religion? If not, how do you make it work?

« Yet Another Star Wars Infographic...
Adorbz of the Day »