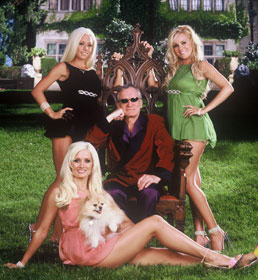 This month’s Elle magazine has an interesting article titled “The Smart Girl’s Taboo: Wanting to be a Kept Woman.” In it, the writer contemplates the success of the E! television show The Girls Next Door and even spends some time with Hef’s three main ladies. She then asks why so many women are attracted to the show – can it be that deep down inside, even successful, independent women dream of being a kept woman?

I know many single or unmarried women who are well-educated, have successful careers, and live very comfortable lives. However, more than a few have told me directly:

“I only went into this field to meet successful (rich) men.”

“I’m proud of what I’ve done and I’m happy with my life. But I want to meet someone who can support me and my lifestyle. After we’re married, I’ll quit and he can bring home the dough.”

Having attended Johns Hopkins, I’ve even met a few girls who admitted they only worked hard in high school to get into a good college so that they can meet a successful man (or a future doctor, in this case).

When I was younger, I thought love conquers all. “All you need is love” – John Lennon was a smart man. Just as long as you love each other, it doesn’t matter if you’re short on cash. The love you have for each other will more than make up for it.

Now, I admit that although love can be powerful, love can also be a lot easier if you have money. Would I love my future husband any less if he didn’t make as much? No. But I know we’d be struggling a lot more.

I’m not sure if I want to be a “kept woman,” per se. But I do know that after I’m married and have kids, I want to stay home for at least the first few years of their lives. And I want to know that my husband can financially support the entire family during this period.

I’d be lying if I said I never daydream about the lives of Holly, Bridget, and Kendra (okay, I watch the show sometimes). Granted, they will never have Hef’s 100% devotion. But aside from that, their wish is their command. They live the lives of princesses.

Are you or do you know anyone who dreams of being a kept woman?