I saw an article titled “How Dumb Was Your First Online Handle?” yesterday on Gizmodo and I couldn’t help but let out a small giggle. It sure brought back some good memories…

The year was 1996.  Everyone was talking about the wonderful new invention called the internet.  AOL was starting to gain in popularity, especially among the 15-30 crowd.  And, in the usual Hwang family fashion, our parents only surrendered their credit card number after all our friends were online.

I quickly entered every possible choice after choice.  It soon became apparent the immense number of AOL members.  Either that, or I wasn’t very creative.

I then remembered a character in an Ann Rice novel — a teenage vampire who burns alive.  Baby Jenks.

Unfortunately, BabyJenks was not available.  But BabyJenk5 was…and 5 kinda looks like an S, right?

I continued to use BabyJenk5 for ten years. On AIM. Message boards. Shopping sites. Even my first blog at Xanga.

What was your first online handle?
Are you now embarrassed by it?
Or do you still use the very first handle you chose?

As much as I grew attached to BabyJenk5, I never loved it because it seemed too cutesy for who I really am as a person. So when a close friend first referred to me as a “geek in heels,” I immediately loved it. I knew that I was ready for a change, and that Geek in Heels was it.

When I first registered this domain name, there was no one else using “geek in heels” or the “geekinheels” moniker on the internet — at least not according to Google. And last year, when I wrote about possibly snatching up some popular top level domain names for this blog, most of my readers seemed agreeable to the idea.

…Except I was too lazy and never got around to registering those domains.

Recently, it has come to my attention that numerous others have been using this handle — there now even exists a geekinheels.net and a corresponding Facebook page for that business! I had told myself that I would think about creating a Facebook page for this blog once it grows a bit more, so I was a bit disappointed to see that facebook.com/geekinheels is no longer available.

There is also a geekinheels Tumblr blog, and various forms of the name are being used all over the Twitterverse and other popular web services.

I know that I may not want to stick with “Geek in Heels” in a few years, as my friend Eva pointed out. However, I became unnecessarily paranoid and proceeded to snatch up the rest of the popular top level domains for geekinheels, in addition to registering for various popular web services with that handle. 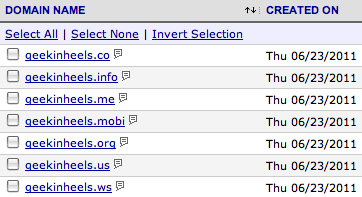 I was able to get these domains for a pretty good price via Name Cheap,
which was voted Lifehacker’s Best Domain Registrar last year.

Once again, this may strike some people as being unnecessarily paranoid. But as a SAHM who is finally starting to generate some moola via her blog, I figure that I better protect my investment…wouldn’t you agree?

P.S. — Today is the last day of the month, and as I checked my site stats this morning I was pleasantly surprised to see that I may just hit 100,000 unique visitors for the month of June! Loyal readers may remember that I had promised to do a big giveaway in celebration if this happens…so keep your fingers crossed (and maybe share some of your favorite posts with your friends?) and you may become eligible to win a pretty nice prize!

« The Jedi Trainer’s Guide to Employee...
How to Irritate All Kinds of People »