Before I begin, I should add a disclaimer that my husband works for AOL. More specifically, he works for a new R&D department at AOL that creates new apps which may be used internally or externally by the former-ISP-giant-turned-internet-publisher.

(Many people don’t realize that AOL owns some of the most popular blogs out there, like HuffPo, TechCrunch, and Engadget. I’m a bit ashamed to admit that even I asked, “Wait, AOL’s still around?” when he was interviewing with them.

You’ve probably deduced by now, by the title of this post and the first paragraph, that J’s team is the one behind AOL Reader.

So it’s safe to assume that I’m a bit biased.

I still believe AOL Reader to be the best replacement for Google Reader. (Go, husband and his team!) 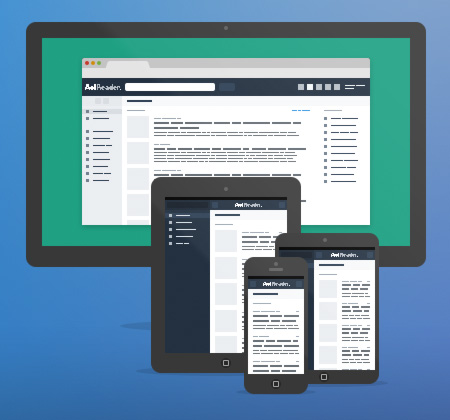 And gave it a go recently and not right after the private beta was revealed (yes, the first release was buggy, but that’s only because the planned release date was moved up due to someone in another company leaking the site, violating an NDA

They not only agree that it’s not a bad product, but that it “has promise,” and that it’s a pretty solid candidate!

I’ll get to the nitty gritty below, but before I do that, I want to highlight my three favorite things about AOL Reader:

Now, on to my review…

AOL Reader’s interface is fairly minimalistic with two color themes: light and dark. (And I’m guessing that somewhere down the road, third-party coders and designers will create new themes, as the API is readily available.) I have mine set to light, but I believe the default is dark.

(It’s worth mentioning that if your browser window is less than 1250px wide, the pane view will transform to north-south, instead of east-west as shown above. I wish there is a way to control this manually. When I asked J about it, he said this is due to the responsive UI.)

When the beta was first released, numerous people — including myself — complained that the feed wasn’t updating fast enough. I’m glad to say that in the past few days, it has been updating every few minutes as all my previous RSS aggregators have done.

I also saw many complaints about the lack of a one-click import from Google Reader. Seriously, people? Importing your subscriptions via an OPML file takes just a few more clicks. (See here to see how to export your Google Reader subs.) Nonetheless, this is now remedied too — if you are logged into your Google account, AOL Reader can import your subscriptions via a one-click import button.

As is the case with other RSS aggregators, each article can be shared with popular social media outlets. You can also mark the article as being important by clicking on the star button, or save it for later with the circle button (which keeps it unread). 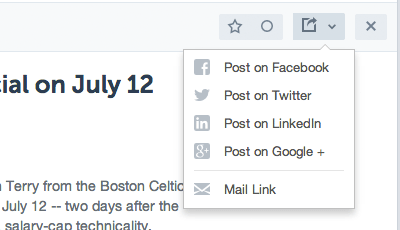 Keyboard shortcuts are readily available too, and just in case you don’t remember them, just hit the question mark on your keyboard and the following menu pops up: 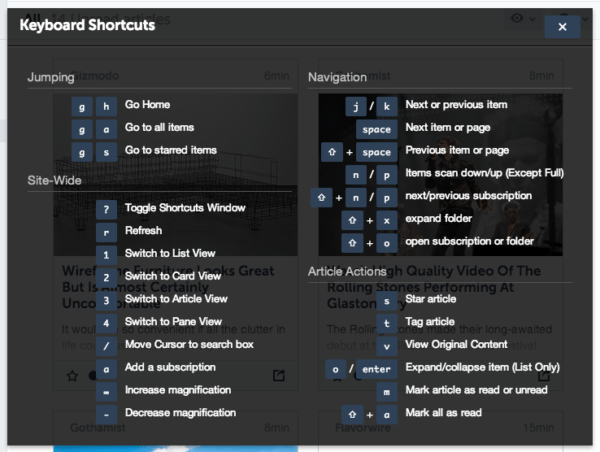 Now, for the things I’m not liking so much…

First up is the lack of the feed title in the pane view. I’ve mentioned this to J and he says that they’re working on it. (I’m assuming it’s a relatively easy fix?)

Secondly, I would like for the author of each post to appear alongside the titles. These days, many blogs have multiple contributors and I like to see whose article I’m reading.

My third issue with AOL Reader is its lack of certain CSS support in displaying the feeds, particularly in regards to images and DIV tags. As a result, some articles lose the formatting the authors — like me! — add to their posts.

The fourth is the mobile version (which can be accessed by simply visiting http://reader.aol.com on your mobile device) — and there are three issues I have with the current mobile version:

So as you can see, AOL Reader is certainly far from perfect. But it is still in beta, and it’s only expected that some bugs still remain, especially as the user base expands and it continues to be used in different settings and environments.

As for the tower ad on the right side of the page? Eh, I’m so used to ads by now that as long as it’s unobtrusive (i.e., no pop-ups, pop-unders, or automatic sound/music playing), I’m fine with them. Besides, having an ad ensures that the product will generate some sort of revenue and will not get the axe, as Google Reader did.

Are you still reading? If you are — and you’re interested in trying the new AOL Reader — I’ve got a small treat for you! Right now, AOL Reader is still in private beta testing phase, which means that you have to be placed on a waiting list to be granted access.

If you don’t want to wait and want access ASAP, tell me the email address you used to sign up for the invite (either in the comments below or via my contact form) and I’ll forward your email along to J to get you moved to the top of the waiting list!

Please make sure you’re already on the list before contacting me, because we can’t help you otherwise.

Not convinced AOL Reader is right for you, and still looking for a good Google Reader replacement? Slate recently published a flowchart of numerous Google Reader alternatives here. For those who are having trouble with the click-and-drag interface (as was the case for me), here it is below:

Questions? Comment below, or go straight to the AOL Reader Feedback page!

8 Responses to “My Pick for a Google Reader Replacement: AOL Reader”