Have you heard of Crystal?

In short, it’s a web app that attempts to analyze and summarize your personality through your web presence. Its main objective is to help improve communication — you can look up anyone you wish and their Crystal profile will tell you how best to communicate with them.

Some have found the service “eerily accurate,” while others find it problematic.

Intrigued, I requested an invite and was granted access a couple of days later.

I felt weird creeping on anyone I know — even J — so I decided to try the algorithm on myself. 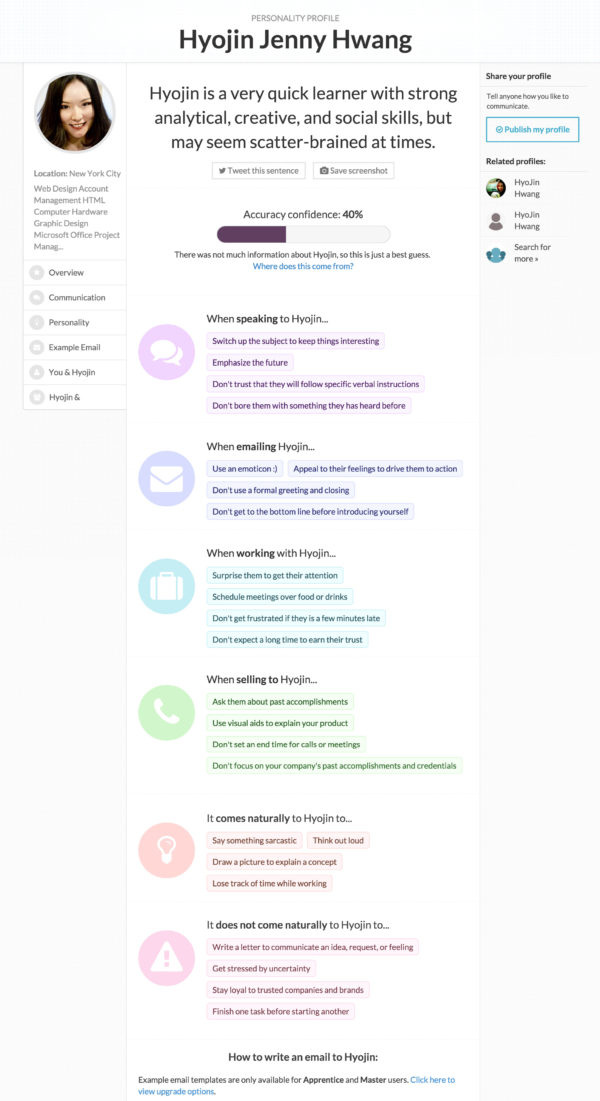 I wouldn’t say that my Crystal profile is “eerily accurate.” (But then again, it’s only 40% confident that its analysis of me is correct.) For example, I practically let out a laugh at the part where it says, “Don’t trust that they will follow specific verbal instructions” — most of my professional acquaintances will agree that I usually follow instructions and requests to a T.

Also, “Don’t get frustrated if they is a few minutes late”? The grammar mistake notwithstanding, I’m one of those people who places a very high value on punctuality and would rather be 30 minutes early than 3 minutes late.

That being said, most of the other stuff seems pretty descriptive of me. And at first, I took some offense to being called “scatter-brained,” but after further introspection, I realized this is correct! I think this comes out more naturally in my online presence — especially here on my blog — as I tend to type my thoughts exactly how they materialize.

I also found it interesting that Crystal suggests people use emoticons when emailing me. I never gave this much thought before, but it makes sense given that I use emoticons in my social media accounts and I find it frustrating when I, or others, have a hard time discerning jokes and sarcasm in written communications.

As you can see, there is a “How to write an email to ____” section at the bottom of the profile. However, this is a premium option that requires a paid subscription.

Crystal is a fascinating concept for this blogger who’s into psychological analyses. (Ahem, Star Wars MBTI chart!) Since I am currently job-hunting, I definitely want to try it out on my future interviewers!