Showrunner Swap: Game of Thrones vs. Parks and Recreation

Last week’s issue of Entertainment Weekly had a brilliant piece which hypothesizes what an episode of Game of Thrones would look like if helmed by the Parks and Recreation showrunner, and vice versa. I got quite a few laughs out of this one-page spread, so I knew I had to scan it for you guys. 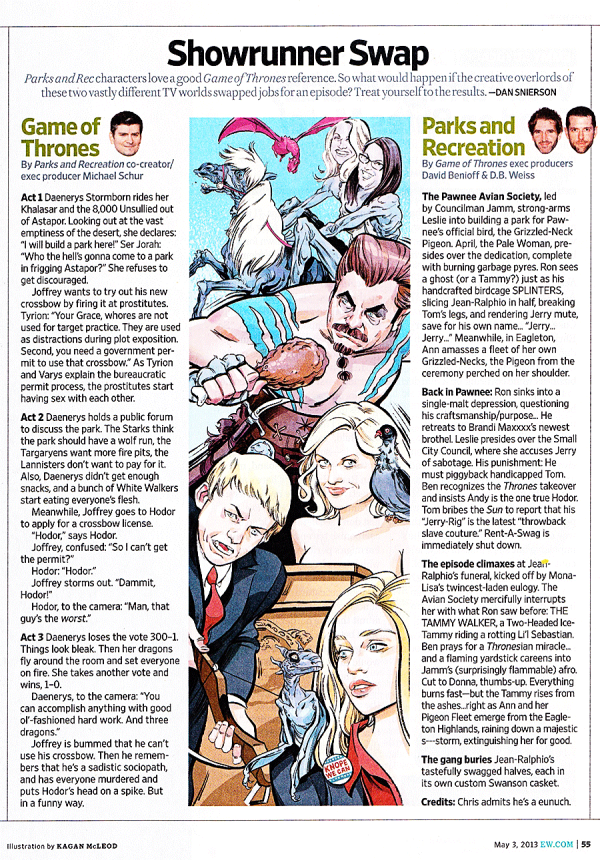 And, because squinting at an image is probably not your thing…

Act 1 Daenerys Stormborn rides her Khalasar and the 8,000 Unsullied out of Astapor. Looking out at the vast emptiness of the desert, she declares: “I will build a park here!” Ser Jorah: “Who the hell’s gonna come to a park in frigging Astapor?” She refuses to get discouraged.

Joffrey wants to try out his new crossbow by firing it at prostitutes. Tyrion: “Your Grace, whores are not used for target practice. They are used as distractions during plot exposition. Second, you need a government permit to use that crossbow.” As Tyrion and Varys explain the bureaucratic permit process, the prostitutes start having sex with each other.

Act 2 Daenerys holds a public forum to discuss the park. The Starks think the park should have a wolf run, the Targaryens want more fire pits, the Lannisters don’t want to pay for it. Also, Daenerys didn’t get enough snacks, and a bunch of White Walkers start eating everyone’s flesh.

Meanwhile, Joffrey goes to Hodor to apply for a crossbow license.

Joffrey, confused: “So I can’t get the permit?”

Hodor, to the camera: “Man, that guy’s the worst.”

Act 3 Daenerys loses the vote 300–1. Things look bleak. Then her dragons fly around the room and set everyone on fire. She takes another vote and wins, 1–0.

Daenerys, to the camera: “You can accomplish anything with good ol’-fashioned hard work. And three dragons.”

Joffrey is bummed that he can’t use his crossbow. Then he remembers that he’s a sadistic sociopath, and has everyone murdered and puts Hodor’s head on a spike. But in a funny way.

The Pawnee Avian Society, led by Councilman Jamm, strong-arms Leslie into building a park for Pawnee’s official bird, the Grizzled-Neck Pigeon. April, the Pale Woman, presides over the dedication, complete with burning garbage pyres. Ron sees a ghost (or a Tammy?) just as his handcrafted birdcage SPLINTERS, slicing Jean-Ralphio in half, breaking Tom’s legs, and rendering Jerry mute, save for his own name… “Jerry… Jerry…” Meanwhile, in Eagleton, Ann amasses a fleet of her own Grizzled-Necks, the Pigeon from the ceremony perched on her shoulder.

Back in Pawnee: Ron sinks into a single-malt depression, questioning his craftsmanship/purpose… He retreats to Brandi Maxxxx’s newest brothel. Leslie presides over the Small City Council, where she accuses Jerry of sabotage. His punishment: He must piggyback handicapped Tom. Ben recognizes the Thrones takeover and insists Andy is the one true Hodor. Tom bribes the Sun to report that his “Jerry-Rig” is the latest “throwback slave couture.” Rent-A-Swag is immediately shut down.

The episode climaxes at Jean-Ralphio’s funeral, kicked off by Mona–Lisa’s twincest-laden eulogy. The Avian Society mercifully interrupts her with what Ron saw before: THE TAMMY WALKER, a Two-Headed Ice-Tammy riding a rotting Li’l Sebastian. Ben prays for a Thronesian miracle… and a flaming yardstick careens into Jamm’s (surprisingly flammable) afro. Cut to Donna, thumbs-up. Everything burns fast — but the Tammy rises from the ashes… right as Ann and her Pigeon Fleet emerge from the Eagleton Highlands, raining down a majestic s—storm, extinguishing her for good.

The gang buries Jean-Ralphio’s tastefully swagged halves, each in its own custom Swanson casket.

(And in case you’re wondering, I didn’t type out the article — I was able to find a version online. 🙂 )

Marvel Comics: What If? 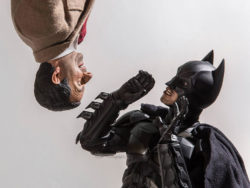 The Secret Lives of Superhero Toys