So Long, and Thanks for All the Fish

In the past 6 weeks, my family has had 4 hospital stays. J is actually still in the hospital and has been admitted for over a week.

Additionally, the virus I had caught a few weeks back migrated to my left eye. I am still being treated — it hurts to look at screens, to do anything that requires concentration with my eyes open (even driving, which sucks because J’s hospital is over an hour drive each way), and I’m constantly getting headaches.

And this is just the medical stuff. 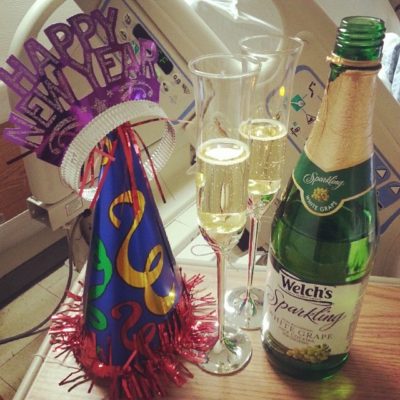 NYE 2013 at the hospital. At least I was able to bring some smiles to the
doctors and nurses who were working that evening by gifting them
bottles of sparkling grape juice and cookies. When your own life is
going to shit, brightening someone else’s day can help you feel better.
At least it did for me.

Last night, as I visited J at the hospital and quietly celebrated New Years at 8pm (because it had to have been midnight somewhere), we looked back on 2013 and agreed that it was a pretty shitty year for both of us.

Because I don’t know how much more of this I can take.

« Delusion Angel*
How Fast Can You Read? »

17 Responses to “So Long, and Thanks for All the Fish”