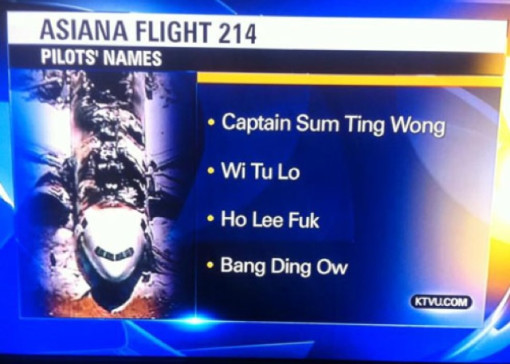 Am I in the minority for being an Asian-American who wasn’t offended by this? Perhaps I’ve been too desensitized over the years, but I found it worthy of a chuckle. Immature and ignorant, yes. A bit too early to be making jokes about an incident that cost innocents their lives? Probably. But — as with many other politically incorrect jokes — comical nonetheless.

Oh, and some eye-rolling for those who failed to catch such an obvious mistake.

I knew that it wouldn’t be long until jokes built upon the original prank, and the one I found today takes the cake. The folks over at Slothed published the following photo with the caption “Korean News Station Pokes Fun at KTVU with Fake American Pilot Names After Southwest Airlines Landing Gear Failure“ 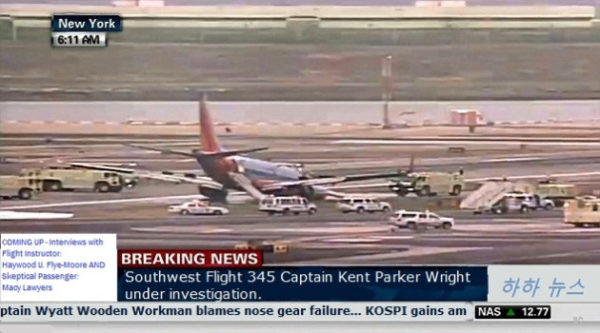 The text can be difficult to make out, but you can clearly read “Captain Kent Parker Wright” in big letters, and “Co-Captain Wyatt Wooden Workman” below.

They even go on to name fake interviewees: flight instructor “Heywood U. Flye-Moore” and skeptical passenger “Macy Lawyers”.

Obviously the Korean news channel seems to be having some fun at KTVU’s expense. Which begs the question, “Do two wrongs make a right?” (Or, to get into the spirit of the discussion: “Do two Wongs make a white?”

On the bottom right corner, where you would expect to see the station and/or program’s logo(s), it says “Haha News” in Korean.

Yep, it looks like no Korean station ever aired this, and the supposed screenshot nothing more than some photo editing.

Still, it’s fun to see how people are reacting to this new viral image — from pure outrage to simple “LOL”s, from arguments on race, politics, and morality to mere “Well played”s.