Switching Up the Morning Routine

Since the moment I got pregnant with Aerin, J took over Claire’s night and morning duties so that I could get some extra rest. The routine has not changed with the birth of our second daughter. In fact, I think that J quite enjoys these moments alone with his eldest — despite the fact that he is not a morning person — and uses them as special father-daughter bonding times.

A typical workday morning usually goes something like this (all times are VERY approximate and change daily):

6:00am:  Aerin wakes up. I change her diaper, feed her, and play with her a bit until she is ready to fall back asleep. Aerin may or may not be sleeping again when —

7:30am:  Claire wakes up. She usually plays by herself in the crib for at least a few minutes: walking around the perimeter whilst supporting herself with the railing, checking herself out on the mirrored closet doors :roll:, and wrestling with her favorite stuffed animals. When she gets bored, she will stand up once again and start whining. Just recently, she has started to yell out, “Baba! Baba!!” because she knows that her dad is usually the one to get her every morning.

8:00am:  J wakes up and prepares a bottle. He changes her diaper and feeds her. Depending on the time, he may put her back into the crib to go back to sleep (if it is before 7am, she will usually sleep for another hour or so) or play with her until it is time to get ready for work.

8:30am:  If J’s parents haven’t arrived for the day yet, he will bring Claire into our room and I will watch both girls while he gets ready for work. If the grandparents have arrived, they will watch Claire while I take a morning nap with Aerin. J usually ends up leaving for work at around 9:00am.

This morning, I noticed that Aerin was in better spirits than usual, so I placed her on our king-sized bed, far enough from J so that he won’t accidentally roll over her in his sleep, and checked on Claire in the video monitor. As suspected, she was up and making faces at the mirror.

So I prepared her bottle and greeted her. She was surprised to see me at this point in the day, but immediately made her ham face and reached up her arms. After changing her diaper, I decided to bring her into our room so that she could drink her bottle there instead, right next to her sister — 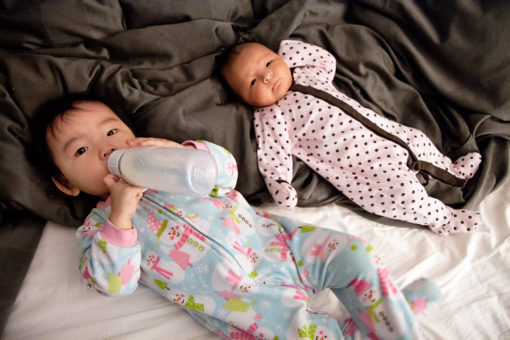 I should mention that for the past couple of months, Claire has not been finishing her morning bottle because — it’s a brand new day! There is so much to do! Why spend it idly drinking milk when I could be causing mischief elsewhere?

Which is completely understandable.

But this morning, she was so happy to be beginning the day with her mom and her dad and her sister that she gulped it ALL down without a fuss. And of course, she reached out to touch Aerin more than a few times while she was drinking her milk. 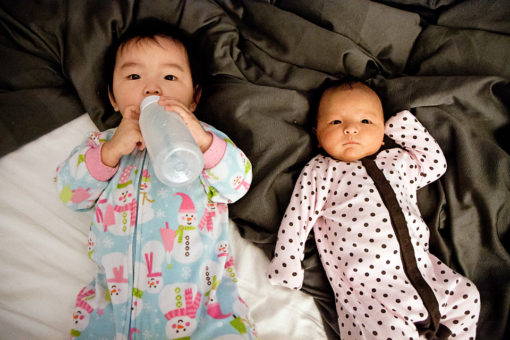 The real fun began when J woke up. He may have missed his special bonding time with Claire this morning, but made up for it by flying her around the room, occasionally tackling her onto the bed.

I can’t wait until both girls are older. Not only because I know that things will be easier, but also in hopes that they will entertain each other before waking mommy and daddy up for the day.

9 Responses to “Switching Up the Morning Routine”