This past Thursday, Claire turned 9 months old and I became 22 weeks pregnant with BebeDeux. I feel that we’re due for an update, yes?

First up: my Claire Bear. 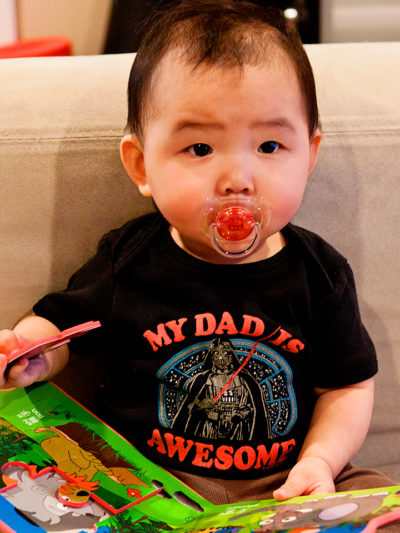 I haven’t been keeping track of Claire’s age by weeks, but according to BabyCenter she is now 39 weeks and 2 days old. I gave birth at 39 weeks and 5 days…which means she has now been outside the womb for almost as long as she was in. Crazy, I tell ya!

My firstborn is certainly starting to become more fun now that her personality is really shining through. More difficult to manage, but more fun.

She LOVES her umma (the Korean word for “mommy”) and we’re pretty sure that she is starting to understand what it means, as she only tends to say the word when I leave the room or when she is in distress and is calling for me.

But, of course, her second favorite person in the world is her baba (the Chinese word for “daddy”). Ever since I got pregnant with BebeDeux, he has taken over the night and early morning shifts with Claire and they have really bonded as a result. I often catch her glancing over at him whenever she seems confused about something.

Claire is one of the most cautious babies I know — whenever she is met with a new object, place, or person, she will not proceed until she is certain that it poses no danger. For example, while most babies will grab and tear at flowers and plants, she will stroke them gently, little by little…and only when she sees that they pose no threat (in addition to looking over at one of us for an approving nod), she will touch and play with them. She has, in fact, been doing this since she was about five months old.

Despite her reluctance to proceed with new objects and people, she is also curious and inquisitive. You can tell that even though she is fearful of the unfamiliar, she still wants to partake in these new experiences and learn from them.

The girl LOVES her books and as a bibliophile myself, I am truly thankful for this. She loves being read to and to play with her books, babbling to herself (my parents say that she’s reading already  :roll:) while flipping through the pages. Here’s a short video J took of her with his phone:

Claire continues to do splendidly with solids. Starting just a few weeks ago, I started to prepare jook (congee, or rice cooked in a lot of water) for her and she devours it like there is no tomorrow. At first, I started out with chopped up veggies with chicken or beef stock, but we have since advanced to more ingredients, including actual minced meat. 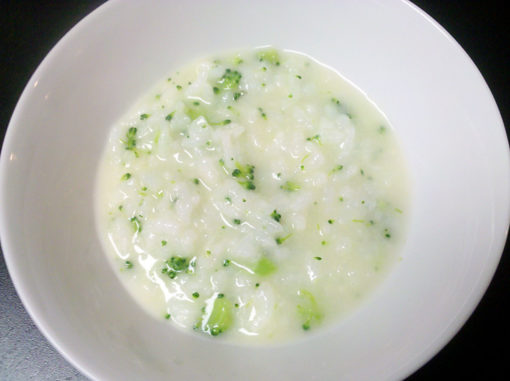 The very first bowl of jook I made for her.
She liked it so much that she cried when we were done.

This weekend, I plan to give her some Korean traditional soups like miyukgook (seaweed soup) and galbitang (beef short rib & daikon soup). I feel very blessed that she does not seem to have allergies…but then again, neither J nor I have any food allergies so we were never too worried about this.

We have also started to teach her to use a sippy cup for the past two weeks. The biggest challenge in getting her to use a sippy cup is that she doesn’t like to hold the cup herself. (She refuses to hold her own bottles too. Believe me, we’ve tried.) She will either open her mouth wide and expect us to hold it for her, or she will slouch down as far as she can in her high chair and tilt the cup against the table to drink from it.

Last weekend, whenever J and I refused to hold the cup for her, she would throw the cup to the floor and glare at us. (Now that I think about it, she throws a lot of stuff when she gets angry.) It took quite some tears, but she is finally starting to get the hang of it: 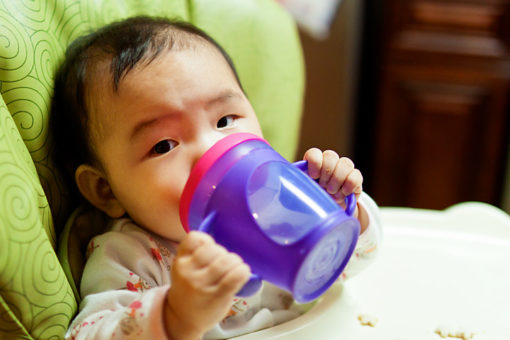 And, because no mother can resist posting embarrassing pictures of her child: 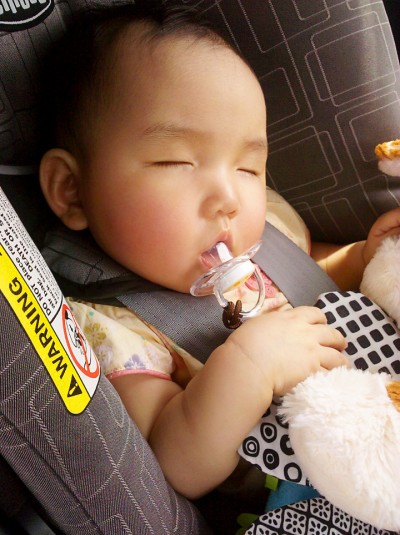 BebeDeux is VERY active. I thought that Claire was active when I was pregnant with her, but looking back I was a naive first-time-mom who just didn’t know any better. Claire would roll around lazily inside my tummy, but BebeDeux seems to be training for MMA. Even J gets amazed at how strong and active she is already because her movements keep me up every night.

I haven’t had any bleeding since those two scary weeks, but I haven’t been feeling any better. The second trimester is considered “the honeymoon trimester” because it is usually the easiest (and this was certainly the case when I was pregnant with Claire), but with BebeDeux the second has been worse than the first. My energy level remains at an all-time low and I still throw up almost every day. I remain plagued by insomnia. My sole consolation remains in the fact that my migraines have started to lessen in frequency.

I seem to be on the same track, weight-wise, as my pregnancy with Claire. This time I am not sweating it as much because I know that my body is just doing what it needs to do and I’m pretty sure I can lose most of the weight as easily as I had the first time around. Everything else seems perfectly normal and healthy, and even my blood pressure remains exactly the same at 100/60 for every OB visit.

Here is the obligatory belly shot. It’s true what they say — you really do get bigger, faster, with subsequent pregnancies. The picture on the left is of me, 22 weeks pregnant with Claire. The one on the right was taken earlier today at the worst possible time of day to take a picture (when the sun was at its brightest), with no makeup or retouching. I really must be getting lazy these days.