The State of the Union, 10 Weeks

Today I’ve decided to regale my readers with another post-partum mega update…complete with stretch mark pictures!

Baby care has definitely gotten easier. Don’t get me wrong — it’s still pretty tough, but the horrendous first six weeks have passed and gone with them are first-time parent jitters (and idiocracy), in addition to the zombie state that plagued our household.

We are now better able to understand the baby’s needs and are even able to differentiate between her various cries: from “I’m hungry,” to “I’m sleepy but I don’t WANNA sleep”; from “I’m bored — can you carry me around the house?” all the way to “What the eff are you doing? I don’t like that.”

Claire is also starting to become picky with her caregivers. In the beginning, I was worried that she would grow to like my MIL more than me seeing as how much time they spend together. However, it quickly became apparent that my daughter vastly prefers to be comforted by her mommy over anyone else when she is upset. When she is crying and crying and SCREAMING BLOODY MURDER, I am the only one who can calm her down almost immediately. While this makes me happy inside — She likes me! She really likes me! — it has become a case for malcontent with J, who’s already sad that he doesn’t get to spend enough time with her and worries that our daughter still doesn’t know her daddy.

For the first few weeks of Claire’s life, she suffered from a major case of day-night reversal. I read that this is pretty common with newborns because while they are in the womb, they sleep during the day when the mother is active (because this creates a calming, rocking motion for them) and tend to stay awake during the night when the mother is asleep.

So we did our very best to reset her internal sleeping clock: leaving the house bright and full of noise during daytime (although this was a bit difficult to enforce with grandparents who wanted to keep the house dim and quiet so the baby can sleep in peace); not letting her nap more than 3 hours at a time; keeping the house dark and quiet at night; and avoiding stimulation as much as possible (even talking) when she wakes up during the night for a diaper change and a feeding.

Within two weeks, Claire was definitely sleeping longer stretches at night — in 3 to 4 hour increments — than during the day, when most of her naps lasted just a couple of hours.

Then something miraculous (well, at least to new parents) happened. Sometime between weeks 5 and 6, Claire began to know when it was nighttime. Getting her to go down for the night was still a challenge, but once she was down for the night, we no longer had any trouble getting her to go back to sleep after middle-of-the-night feedings. All I needed to do was change her, feed her, and place her back in her bassinet and she would fall right back asleep.

Guys, you don’t know how much of a lifesaver this new nighttime sleeping habit has been. Especially now that she sleeps in 4-5 hour stretches during the night.

Starting week 8, both sets of grandparents voiced their concerns at the baby’s bassinet becoming too small.

“It’s designed to support up to 25 lbs, and the baby is still less than 12 lbs!” I protested. “There’s still plenty of space for her.”

But they kept nagging. “What if she learns to roll over in her sleep? She might suffocate on the side of the bassinet.”

I had been planning on making the change to the crib after the 3-month mark, but the nagging got to me.

So we began the transition by keeping the bassinet in her room for a week, right next to the crib so that she will get used to sleeping in a new room. And last week, at the 9 week mark, we had her sleep in the crib for the very first time…and it was a success! It was as if nothing had changed, and we were still able to check in on the baby using our video baby monitor. 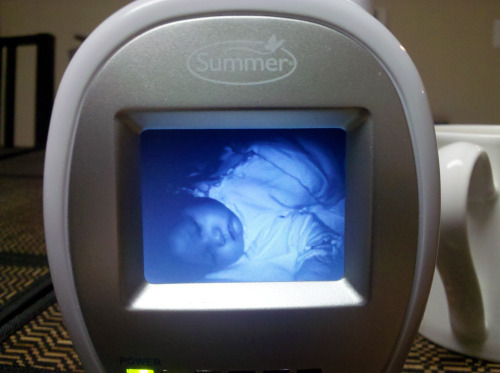 On 12/9 I tweeted this picture with the caption “Claire’s first night in her crib went fanstastically well.”

They say that the last 5-10 lbs are the most difficult to lose after having a baby, so I am giving myself a bit more time and am aiming to lose the rest by J’s birthday, on January 27.

A friend asked me what I was doing for the weight loss. I’m ashamed to say that so far, nothing. The first 30 lbs really just melted off without trying at all, and I must attribute the other 10 to my being sick (thrush, mastitis, then thrush again), quitting breastfeeding, and the stress of the past two weeks. In addition, I haven’t been eating nearly as much as I used to pre-baby. It’s almost as if the baby is “helping” me lose weight by starting to cry whenever I get a chance to sit down and eat.

My belly remains a bit flabby and stretched-out. And while I had a pretty cute belly button pre-pregnancy, it is now large, hollow, and droopy. I measured my waist and still have 4(!) inches to lose to return to my pre-pregnancy size. I guess this is where the remaining 10 lbs have been residing.

Here is what my belly looks like today (click to view, as I’m sure not everyone wants to see a post-partum belly): 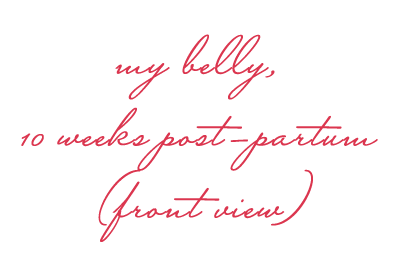 As you can see, my linea nigra has faded some but still remains (when will it fade entirely?). As for the spots on my upper tummy? Those are acne scars. Pregnancy, and breastfeeding, led me to have HORRIBLE acne all over my back and shoulders, and some spread to my chest and upper belly as well.

Here is a side view where you can see the full extent of my stretch marks: 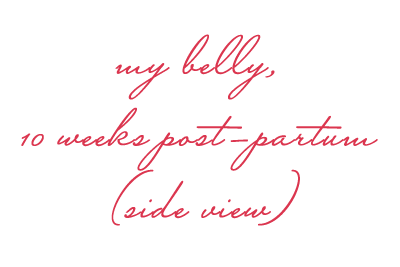 The stretch marks on my left side are slightly better, but not by much.

Compare my current linea nigra and the stretch marks to those at 25 weeks pregnant. And I thought those were bad!

They say that acne scars can take up to a year to fade away, and while my mother’s pregnancy stretch marks (in the same spots!) disappeared over time, I’m not sure how long it will take mine to diminish.

So even if I do return to my pre-pregnancy weight, I think it’s safe to say that my bikini-wearing days are over. It’s okay — I hardly go swimming anyway.