They say that when your toddler mispronounces or incorrectly says a word, you should gently correct them so that they will learn.

But how can you, when what they is soooo much better than what is intended?

dog: aki
We’re not entirely sure how Claire got from “dog” to “aki” when the two words are so different. We’re guessing that it stems from my sister’s dog Dante — Claire somehow had trouble saying “Dante” when she first learned his name, so she started calling him Aki instead. Now, she calls all dogs “aki.”

monkey: hoho
The name of the monkey in Ni Hao, Kai-Lan is Hoho. Hence, she has started to call all monkeys “hoho.”

thank you: ah-koo
Is the th sound difficult for all toddlers to pronounce? If not, Claire has trouble pronouncing it because we have spoken to her primarily in Koren and in Chinese since birth — she’s developed a FOB accent! Although her pronunciation of “thank you” is improving day by day, our entire family — including the grandparents — have started to say “ah-koo” in its place because it’s just so cute and funny.

Andrew: Jew
My sister’s fiancé Andrew has been relegated to “Jew.” Is it just a coincidence that he’s Jewish?

One of the most common questions people ask us about the girls is regarding their multiple-language environment. To be honest, I’ve never been too concerned about it. I just didn’t realize how much Claire had advanced until I caught her one day, sitting on the couch between her two grandfathers, comfortably conversing with both of them and switching back and forth between Korean and Cantonese without missing a beat. To witness such a young kid (she is now 28 months old) do this is quite remarkable! 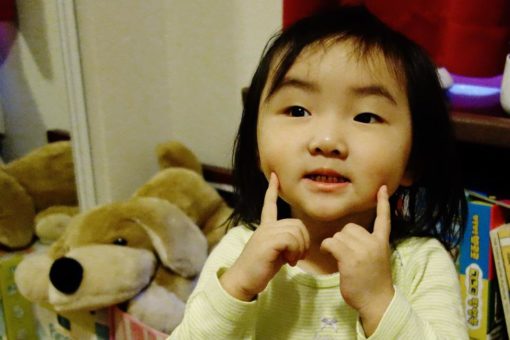 Claire strikes this pose and says “Cheese!” whenever she sees me with the camera