What Your Email Address Says About You

Remember when Gmail was invite-only? I remember getting overly excited for J when he became the first person I knew in real life to get a Gmail invite (only a couple of days after the service launched!), and feeling a strange sense of accomplishment when he was finally able to invite others and gladly presented his then-girlfriend (ME!) with the first.

In the six years since Gmail first launched, it has become THE email provider of choice among my friends. I have long since deactivated my Hotmail, MSN, and Yahoo accounts, and when I first bought this domain two years ago I began using Google Apps (which uses a more secure and stable version of Gmail) to manage my @geekinheels.com email along with the few other Gmail accounts I own.

So according to the chart below, I’m pretty computer-literate, as I only use my own domain and Gmail. 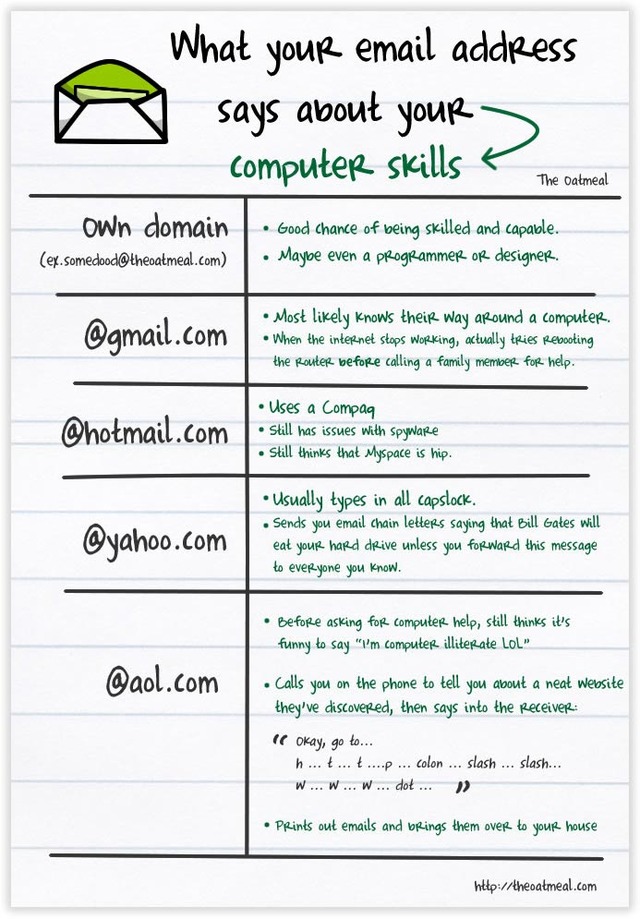 Having used all the email providers in the chart, I can honestly say that Gmail is the most efficient, intuitive, and easy-to-use email service on the market. I would say that about 95% of the people I know (including my parents, who are practically computer-illiterate) use Gmail.

I do have a friend who still uses her @aol.com email as her primary email account, and whenever people ask for her email address she has to launch into an explanation into why she still chooses to use AOL.

Is your primary email NOT Gmail? Why do you prefer to use this email provider over Gmail?

[Chart via The Oatmeal.]

« Grammar vs Sarcasm
Do You Know Anyone Quitting Facebook Today? »

44 Responses to “What Your Email Address Says About You”