Why I Am Scared to “Wear” My Baby

(In addition to the possible suffocation and tailbone issues, that is…)

I have a confession to make. I have never stated this publicly because it is a condition that has plagued me for all my life. I was made constantly fun of as a kid because of this, and I still am very sensitive about this issue.

I have ugly legs.

You may laugh at me and tell me that lots of women think their legs (or any body part for that matter) are ugly. But I believe that I have a legitimate reason; because not only do I have bowlegs, they are also crooked at the knees.

I have never posted a picture of my legs before, but here they are for you to see: 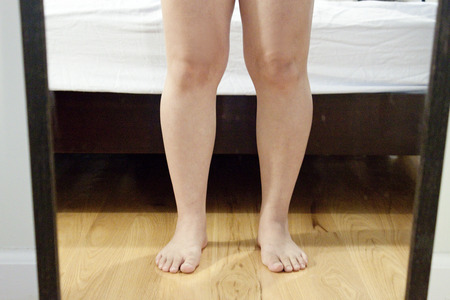 Because of my legs, I almost always wear long pants. When I wear shorts, they are bermuda-length and hit right below the knees. All my dresses and skirts also hit right at, or below the knees as well.

I never wear mini-skirts. I never wear leggings. I don’t even wear skinny jeans because they do nothing but showcase this problem.

I have tried products that reportedly help alleviate the problem, such as the Japanese O-Leg Supporter, with no success. I have even seriously contemplated surgery to straighten my legs, but decided not to when I discovered that I would not be able to walk for months.

My sister doesn’t have this issue. The rest of my family’s legs are fine. So what happened to me?

I firmly believe that my legs are a result of my mother and my grandmother wearing me in a podaegi (a Korean baby wrap) for most of my infant years. Although my sister was worn in a podaegi as well, it was not nearly as much as me as I was regularly carried in a podaegi for the first couple of years of my life, for hours at a time.

Starting in the 1990s, this traditional Korean style of carrying babies in the podaegi has been blamed for bow-leggedness within the Korean population. While I’m sure nutrition has some part to play in the high level of bow-leggedness among Koreans, many Korean mothers now refuse to wear their babies in podaegis in fear that their children (especially girls) will end up with ugly legs (like mine).

I never had any childhood illnesses that may have contributed to my crooked and bow-shaped legs. My family was poor in Korea, but we always had healthy food and my mother fed me well. I have never had any leg pains or issues running/walking. And since the rest of my family’s legs are fine and dandy, I can only conclude that the podaegi contributed to the current state of my legs.

Experts say that the bowleg issue can happen with any baby carrier if you carry the baby for too long in the incorrect position. Newborns have to be carried with their legs bent in the lotus position, because this is the natural position for them for the first few weeks. However, after they start to stretch their legs out, you are supposed to carry them in a way that lets them extend their limbs, instead of confining them.

But what about carriers that wraps the baby’s legs around the torso of the carrier? Like the podaegi or the mei tai, which is growing in popularity here in the states?

All I know is that I will only be “wearing” my babies very sparingly, and would never use a podaegi or a mei tai. J and I registered for an ERGObaby, but will only use it so that our baby will face the front with her legs dangling out and not wrapped around our torsos, and never for more than an hour at a time.

I know that many baby-wearers who read this may take offense at this post and try to convince me of all the benefits of baby-wearing. However, this is a decision I have decided to make just based on my own experiences. If there is anything I can do to help my baby lower the risk of ending up with legs like mine, I will gladly do it and this decision is just one of them.