A few weeks ago, I was shocked to discover some tan spots on Claire’s scalp. They varied in size from a eighth of an inch to half an inch in diameter. The coloring looked similar to how one’s skin looks as a cut/scrape heals, so I immediately checked to see if they were results of injuries. They were not.

The spots are flat and do not wash out with water and soap. They do not seem to bother her at all, so I am pretty certain that they are birthmarks — café au lait spots, to be more specific — which I did not notice prior to that day due to her hair. (I will be bringing them up at her next pediatrician appointment, just to be certain.) I suspect that I was only able to see them this time because we were out in the sun. Even then, they’re hard to spot unless you’re actually seeking them out. 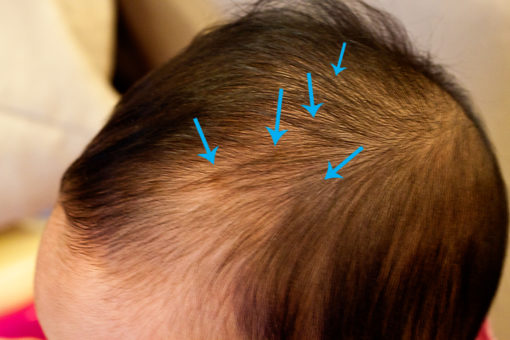 The spots are hardly noticeable, especially with her dark hair covering them.

My first thought at discovering these birthmarks was, ‘Thank goodness they’re on her scalp and covered by her hair!’

…And I immediately felt guilty for having this thought. Because as a mother, aren’t I supposed to love and accept my daughter exactly how she is, imperfections and all?

But the more I thought about it, the more complicated the issue seemed to become.

At what point does a parent intervene with nature, i.e. the way you were born, to help ensure the best possible life and opportunities for your children?

Because as much as I hate to admit it, we live in a world where one’s looks count a lot more than we would like. We also live in an unjust world where more attractive people are generally treated better and afforded greater opportunities.

There’s also the fact that kids can be extra cruel. I myself endured tons of teasing growing up and would wish nothing but the opposite for my children.

So if those spots were someplace more conspicuous, like on her face, I would not be opposed to having them treated and/or removed later on in her life (but only if she wished to do so).

And — because I make it no secret that I myself have had cosmetic surgery and am not ashamed of it — I would not be opposed to her having the same surgery if she wishes, as long as she is past the age of 18 and is certain that she wants it.

Let’s make one thing clear: I do not love my daughter any less for having the spots, not having a double eyelid, etc. Nor would I love her any more if she did not have the spots or had double eyelids. I would merely not be opposed to her getting these cosmetic procedures done if it would make her happier, more confident, and may lead to an easier life.

J, on the other hand, is vehemently against altering your natural self. I still remember asking him, right before Claire was born, if he would be against her getting reconstructive surgery to correct a cleft palate (should she be born with one). Even then, he says that he would hesitate.

But then again, J was always popular in school, well-liked with tons of friends and was rarely teased. He would not know the emotional trauma that can result from bullying and teasing. (Would this even make a difference?)

What do you think? Should we all just be proud of what nature gave us, no matter what? Would you ever physically change anything about your children if it meant that it could give them a better life? If so, where would you draw the line? A large mole? Braces? Ear piercings?

« Harry Potter Math
A Book to Keep You Cool This Summer »

22 Responses to “Working With Nature”