I am now officially in my 9th month of pregnancy. Only ~4 weeks left to go!

I have a friend who gave birth at 36 weeks and I keep thinking back to visiting her and the baby at the hospital. Sure, the baby was tiny (about 5¾ lbs) but he was still pretty darn cute with chubby rosy cheeks, and was able to breathe on his own with no complications. All I can do is smile, knowing that at this point, our baby is at a similar stage and that even if I were to give birth right now there would most likely be no complications to her health.

I also learned something new yesterday while reading Baby 411 — if the baby were to be born right now, she would not be considered a premie, but a late pre-term baby. The label “pre-term” is designated for those who are born before 34 weeks; 34-36 weeks is considered late pre-term, and 37 weeks onwards is full term. Which means that I only have a week to go before I’m full-term!!!

I continue to become more and more uncomfortable as the days go by. Here is a run-down of my current condition…

Breathing
Breathing has become especially difficult in the past couple of weeks as the baby continues to grow and presses up against my lungs. I’m actually looking forward to her dropping so that I will have more room to breathe…but then again, I know that my hip pains will worsen when this happens.

Hip/Crotch Pains
Still there, and growing worse with each day. My right hip especially likes to act up and it feels like my hip joints are about to disconnect with each step that I take. And I like to compare the crotch pain to getting repeatedly kicked in the groin. Sometimes I like to massage the area because it helps with the swelling and pain; I know that I look ridiculously pervy in the process but you gotta do what you gotta do.

Innie or Outie?
My belly button has stretched out considerably over the past 9 months, but it still clearly remains an innie and shows no signs of inverting. I’m actually a bit disappointed, because I used to joke at the beginning of the pregnancy that my belly button will “pop” like a pop-up timer on a turkey when the baby is “cooked” and ready to come out.

Snoring
J told me that I have started snoring pretty loudly in the past week or so. Pre-pregnancy, I hardly ever snored. When I did, it was only after an especially long/difficult day so I’m a bit embarrassed and feel bad for my husband who has to put up with the noise. However, I do know that snoring is a common side effect of pregnancy and that I can probably attribute it to my weight gain and increased fatigue. I can only hope that it will disappear soon after the baby is born.

Peeing
I have always been proud to have a large, strong bladder. I have not had any accidents during this pregnancy and hope to keep it that way. And up until just a week ago, I have still had pretty good bladder control, especially during the night. Then all of a sudden, I had to wake up in the middle of the night for the sole purpose of needing to pee. This started about a week ago and I haven’t had a good night’s sleep since then. It was horrible timing to say the least, because my insomnia was finally starting to let up.

Pooping
Remember how as the third trimester started, my first trimester symptoms began sprouting back up? And one of those symptoms included constipation? Well, we can cross that off the list because I’ve been pooping like no other in the past couple of weeks. Pre-pregnancy I only pooped every 2-3 days. Now I poop 3-4 times a day! I’ve read that loose bowels is a sign of impending labor. But seeing as how I still have a month to go, I can only imagine the explosions (“When you’re sliding into first, and your pants begin to burst…”) that will arrive as I go into labor.

Bloating/Swelling
They’ve gotten worse…a lot worse. Remember the replacement wedding ring I bought? I had gotten that in a full 1.5 larger size and it was a bit loose when I first received it. Well even that won’t fit anymore. My feet, ankles, and calves get so swollen by the end of the day that the skin in the area actually hurts from the stretching. I put up my feet every night, been drinking lots of water and limiting my salt intake with not much success. I guess I’ll just have to wait.

Wrist/Finger Joint Pain
Starting at about a week ago, I noticed pains in my wrist and finger joints whenever I woke up. Luckily they disappear after a few minutes of doing hand and wrist exercises (stretching, flexing, etc) but they have slowly grown more intense and painful with each day. I’m still not sure if it’s carpal tunnel syndrome (another common side effect of pregnancy) or just joint pains from extra fluid retention. But I will be sure to ask my doctor about it at my next visit.

According to most sources, the baby now weighs about 6 lbs and is 19 inches long. She is getting so strong — my belly regularly performs jiggles, wiggles, and Alien-esque protrusions. Sometimes I can swear that she is playing xylophone with my ribs, or that she has found a new favorite squeeze toy with my bladder. 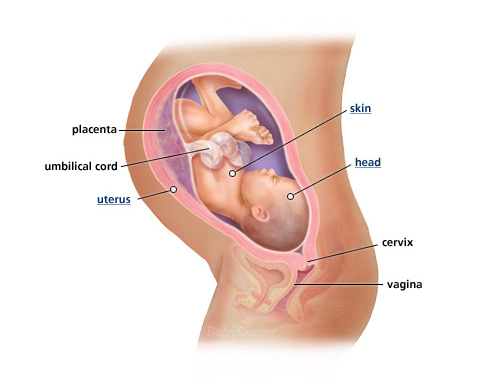 Last night I had a dream that the baby was born, and I was dismayed to see how ugly she was. A true-life conehead, vernix everywhere, purple and brown birthmarks all over her body, only the worst features from both her parents, etc. I felt horrible about myself when I woke up — how superficial am I?

« Evil Movie Corporation Websites
How to Open a New Book »