A Compilation of Claire’s Recent Funnies

Claire hates, hates, HATES getting her toenails clipped. She’s okay with us clipping her fingernails, but she has a strong aversion to our clipping her toenails…she’ll even start crying when she sees us clipping Aerin’s toenails! (I’ve tried clipping my own in front of her, making it seem like it was THE most fun and exciting thing in the world, but she still hates it. If anyone has any advice on this front, I’d love to hear it.)

The other day, I noticed that a few of her toenails were getting too long so I knew that we needed to take care of them. As expected, Claire bawled her eyes out and continued to sniff long after I was done. Since I was busy trying to cheer her up after the event, I failed to put away the nail clipper properly…and as soon as Claire felt better she got ahold of it. And before I could get it back from her, she began to shove the clipper between the couch cushions! The little booger was trying to hide it away so that I wouldn’t be able to use it in the future!

Earlier this week I caught Claire taking our Baby Bjorn (being small for her age, Aerin is not quite big enough to comfortably fit in the Pognae yet) out of its usual resting place. Curious to see what she would do with it, I sat back and left her alone. She struggled with it for quite some time, and only when she began to drag it to the full-length mirror in her room, picking up her giraffe on the way, did I realize that she was trying to wear her giraffe with the Baby Bjorn just as she sees me do with Aerin!

And yesterday, she placed her giraffe on the bouncer and insisted that we strap it in, just as we do with Aerin. Once it was securely strapped in, she turned on the music and vibration — once again, just like we do with Aerin.

A couple of months after Claire was born, our friend Other Pieces of Me sent us a surprise gift package of tried-and-true baby toys that her son had loved when he was younger. Included among the generous presents was a set of stacking cups. I had been showing Claire how to use the cups (nested as well as stacked) since she was about six months old, but she never really took much interest in them…until now, at 17 months old.

On Tuesday, I saw out of the corner of one eye that Claire was fiddling with the cups. When I was able to devote my full attention to her, I realized that she had nested all the cups within each other according to size! I praised her lavishly for her accomplishment, and she carried the cups to the coffee table where it could be prominently displayed. Then, to add the cherry on top, she took her sippy cup and carefully balanced that on top of her masterpiece! 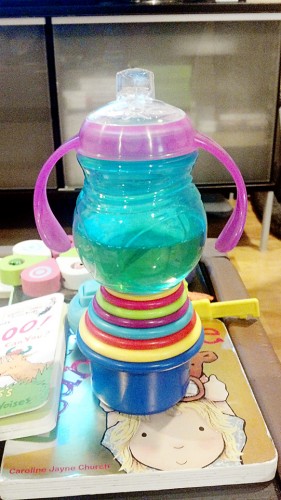 A couple of days later, I left her alone for a few minutes so that I could change Aerin’s diaper. She was playing with the stacking cups again, so I just figured that she would be nesting them as she had earlier in the week. However, I returned to find this: 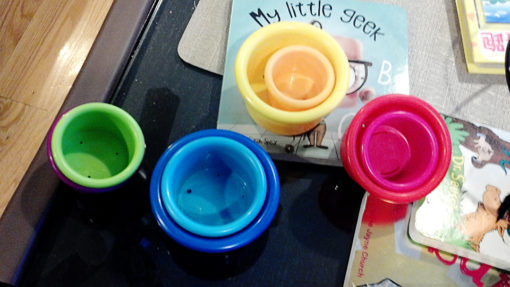 She had sorted the cups according to color! (Okay, so the green and the purple don’t really go together…but they were the odd ones out.)

As mentioned in a previous post, our playmat has animals all over it. When I have my hands full with Aerin, I like to multitask by asking Claire things like, “Can you tell me where the elephant is? How about the bear?” while she points them out on the mat.

Last week, when my sister was over, they were playing the same game and Claire went on to correctly identify each animal. But when my sister asked, “Where is the rabbit?” Claire suddenly stood up and left the room. My sister and I looked at each other in confusion, and we were about to go follow Claire to see what she was up to when she returned. In her hands were the two rabbits from her Duplo set! AND she correctly set them on top of the picture of the rabbit on the mat!

Claire’s second word was “baba,” which is the Chinese word for daddy. We know that she can correctly identify her dad, because whenever she sees a picture of him, she will point and say “baba” (just recently, she has started to call her dad “ahpah” — which is the Korean word for daddy — in front of me, but calls him “baba” in front of him).

But lately, the little punk has started to toy with her dad. Whenever he asks her, “What do you call me?” she will coyly say, “Mama!” (She calls me “umma” to my face…she’s really starting to differentiate between the Chinese and Korean languages now!) Only when J shakes his head and tells her “No” will she correctly call him “baba” with a mischievous smile on her face.

When I am home alone with the girls, I always leave the door open when I go to the bathroom so that I can keep an eye on them. Recently, Claire has taken to following me into the bathroom — not to wreak havoc on the cabinets and toiletries, but with the toilet paper in mind.

I know what you must be thinking: she grabs the toilet paper and runs out of the bathroom, leaving a wondrous trail of white quilted goodness behind. And while she has done this once, this assumption is incorrect.

What Claire really does is to grab the toilet paper and rip a section off — the exact length I need to wipe myself after a pee — and hands it to me! Once I thank her, she will nod her head, shoot me a look of pride and walk out of the bathroom to continue doing whatever it was she was doing at the time she saw me go into the bathroom.

Since I haven’t posted a picture of her in a while…here’s one I took yesterday: 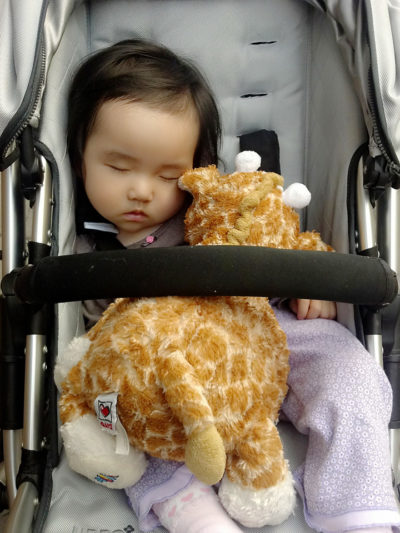 A picture of her sleeping is the only kind I can get these days, because she’s so darn fascinated with cameras! She is so sensitive to her surroundings that she has not been able to sleep anywhere aside from her crib and occasionally the carseat since she was about six months old. The reason she fell asleep in the stroller yesterday? Because girlfriend flat-out refused to nap (she is down to one 1.5-2 hour nap per day now) and so was dead-tired when I took her and Aerin to the grocery store at 4pm.

She started nodding off when I was in the checkout line, and by the time we stepped outside, she was gone. I didn’t want to wake her — and because it was such a beautiful day — I stayed outside, pushing her back and forth in the stroller with Aerin strapped to my chest, until she woke up 15 minutes later.

Look at that face. I’m so stinkin’ in love with her.

« If “The Hunger Games” Movie Was Made...
Dollar Store Stickers »

16 Responses to “A Compilation of Claire’s Recent Funnies”