I love that there is a dollar store within walking distance to our home, because it is a great place to find cheap sources of entertainment for Claire (e.g., helium balloons).

Earlier this week, I purchased a package of hearts stickers (pink GIRLY hearts that Claire herself chose…what else did you expect from her?) and she’s been having a ball with them. This morning, I even caught her lying on her stomach, carefully placing each sticker in an unused scrapbook I had given her. I so wanted to get a picture, but she predictably stopped what she was doing as soon as she saw me coming towards her with a camera.

The good news is that an hour later, I was able to get this shot: 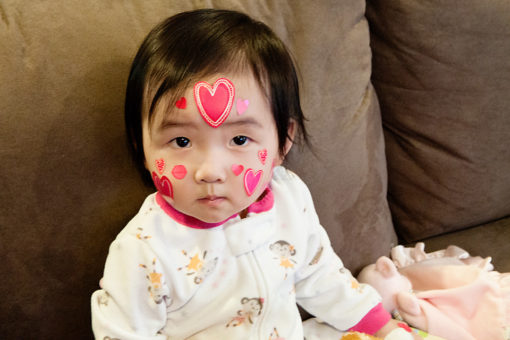 When she had become bored of putting stickers on plain ol’ paper, I had taken one and put it on her giraffe’s nose…and she cracked up. I then put one on my nose, and she motioned for me to put one on her face too. She immediately ran to the mirror, made her ham face, returned to me to ask for another.

This continued with each sticker until her face was covered in them. When she finally decided that she had enough stickers on her face, she pranced around and struck multiple poses in front of the mirror like she was the most gorgeous creature in existence.

I can’t wait until she starts experimenting with makeup.

« A Compilation of Claire's Recent Funnies
Reverent Sundays: "The Intolerance of Tolerance" »