All 117 Things That Leslie Knope Supports, and Negative Campaign Ads

I did not like the first season of Parks and Recreation. I couldn’t help but think that the show was a major waste of talent and was annoyed at how Leslie Knope (Amy Poehler’s character) was written as a moron who didn’t know when to give up.

Now, four seasons in, Parks and Recreation is currently my favorite television show. It is quirky and charming with lovably flawed characters you can’t help but root for. And yes, Leslie is still determined more than ever, but she is no longer the vapid idiot I rolled my eyes at in season one.

Fans of the show know that Leslie is currently running for City Council, and that the latest episode featured a naively-optimistic — and completely hilarious! — campaign ad:

To my utter delight, BuzzFeed has compiled the full list of 117 things that Leslie Knope supports (funniest ones in blue): 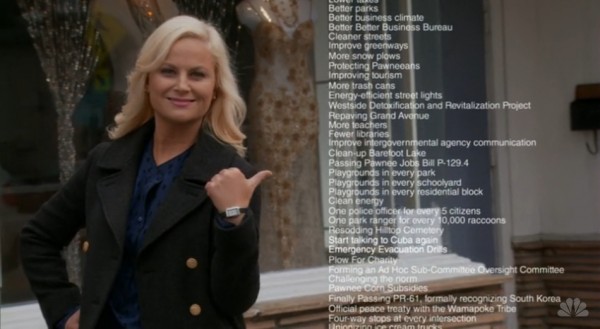 I personally loved Leslie’s video and her disdain for negative campaign ads, where a candidate paints his/her opponent in a negative light. It is precisely for this reason that I look forward to each election season with about as much enthusiasm as I look forward to a root canal: I can’t stand the smear campaigns! In fact, I can’t remember an election since I turned 18 where a candidate did not resort to negative ads.

Would a positives-only ad campaign — where the candidate only focuses on his or her merits and never says a bad thing about their opponent — ever work in the real world? Do voters need to hear crap about your opponent in order to vote for you? If anything, I get turned off by a candidate whenever I see them running a smear ad.

Am I being too naive here?

3 Responses to “All 117 Things That Leslie Knope Supports, and Negative Campaign Ads”