Welcome to the very first installment of Reverent Sundays, where I write about an aspect of my faith. This can deal with recent books I have read on Christianity, my thoughts on religion and current issues, as well as particular messages I find touching and/or powerful. I am aware that most of my readers are not religious, and that is fine — you are more than welcome to not read these posts if they make you uncomfortable, enrage you, or bore you to tears. I am open to debates and discussions in the comments section as long as everyone remains respectful. Enjoy!

One of my biggest annoyances is when people — Christians and non-Christians alike — take certain Bible verses out of context, usually for their own gains.

The Christian Bible is history, philosophy, sociology, and theology all rolled into one. It is one of the most studied texts in human history — and yet I doubt no one human has ever completely understood it.

So why do so many people, even those claiming to be Christian, cherry-pick verses, quoting them to get their agenda across? If anything, we should treat each verse of the Bible with as much respect — and probably even more reverence — than any other scholarly, religious, and/or ancient work. 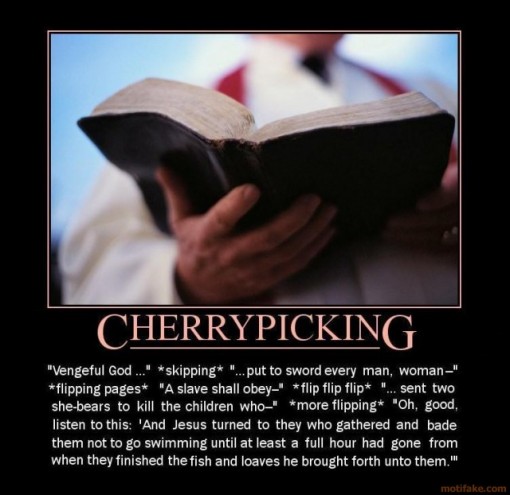 When reading the Bible, it is important to consider two things. The first is that we should interpret the Bible according to “progressive revelation.” This means that although God is unchanging, the way that He has chosen to deal with humanity has changed throughout history, as He has gone through different covenants/agreements with mankind.

For example, much of the rituals we read about it in the Old Testament have been fulfilled by Christ. Colossians 2:17 is referring to these rituals when it says “These are a shadow of the things that were to come; the reality, however, is found in Christ” (NIV). This is why we are no longer practicing the Old Testament sacrificial system: because Christ fulfilled our need to atone, once and for all.

And this is why I get tempted to roll my eyes whenever someone tries to challenge my faith by saying something along the lines of, “Your Bible also tells you that you are ‘unclean’ when you are having your period and you should be isolated. Why don’t you follow that rule?”

Because it is an Old Testament law that has been fulfilled by Jesus. Because these laws were designed to protect and provide for the purity of the Jews until the Messiah came, and when Christ tore down the barrier between Jew and Gentile — the Old Testament laws being a huge part of that barrier — the laws became no longer necessary.

(It should be noted that moral laws, such as what we find in the Ten Commandments, will never pass away because they are rooted in the very character of God.) 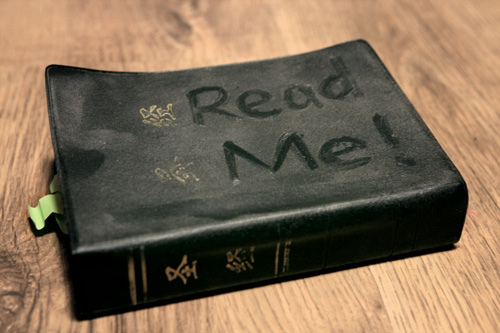 I found this image at this now-defunct Tumblr blog whose aim was to post the “most atrocious
bible verses” he could find. I agree with the author of the blog that Christians should know
what’s there in the Bible, including the ugly stuff.

Secondly, we must always remember to interpret a passage in light of the context and history of the passage. What else is being said before and after this passage? Who was the original audience of the passage? What sorts of things were going on at that specific time and place?

For example, in 1 Corinthians 11:6, Paul says it is a disgrace for a woman to pray with her head uncovered, and that she “might as well have her hair shaved off.” (NIV). The historical context for this passage is that Corinth was a very raw city — as a port city, it was the center of action and was very focused on hedonism, sex, money, and such.

Also, in ancient culture, for these particular people at this particular time and place, wearing head coverings was the cultural norm. The only women who didn’t wear head coverings were prostitutes, who advertised themselves by walking around with shaved, uncovered heads.

The Christian women in Corinth were enjoying their freedom in Christ, that they didn’t have to wear head coverings anymore…but they were getting confused by others for temple prostitutes. So here, Paul is pleading with them to sacrifice their freedom in order to protect their witness/the witness of the church.

You could read the passage at face value and think it’s telling you to wear a head covering, but if you delve into the historical situation, you take away an even greater theological truth and the real spirit of the passage: the idea that sometimes it’s better for sacrifice your freedom rather than flaunt it, for others’ sakes.

And the same goes for all the other contested passages in the Bible.

It may be a Levitical Law that no longer pertains to those who believe that Christ died for their sins. It may be part of a historical record of things that have passed. It may be pointed specifically at the people for whom the passage was written. Whatever the reasons for the existence of these passages, they are always included as a part of a larger story and message.

« All 117 Things That Leslie Knope Supports, and...
My First Night as a Volunteer at the Homeless... »