Last week, both kids received their flu vaccines…and they’ve been coughing since. Claire seems to be holding up pretty well, but Aerin’s dry cough turned into phlegm-y, hacking fits which progressed to a fever. And with her surgery date so close, the doctor advised us to keep an extra watch on her.

Like most kids, Aerin tends to get overly clingy when she’s not feeling well. So it’s no surprise that I got a little sick too…

I think it goes without saying that these past few days have not been fun. And while I have a ton of half-finished posts in my drafts folder, I’m having trouble mustering up enough brain power to complete any of them.

But since I love sharing interesting things I find online, I felt the need to drop by and plaster this blog with these mock memos from the desk of S.H.I.E.L.D. director Nick Fury: 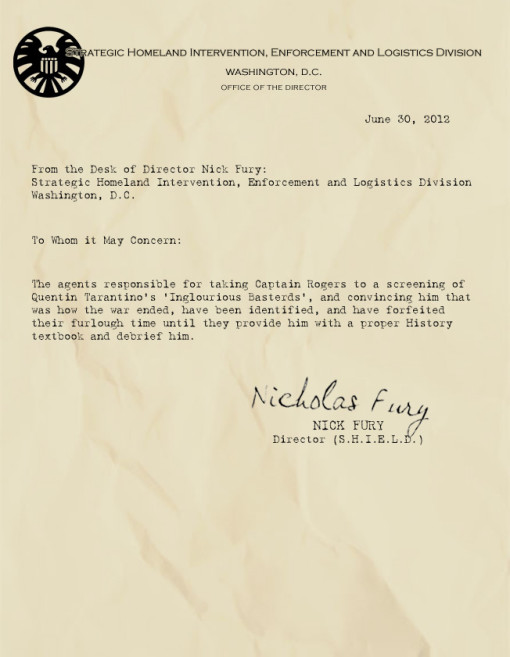 The agents responsible for taking Captain Rogers to a screening of Quentin Tarantino’s ‘Inglourious Basterds’, and convincing him that was how the war ended, have been identified, and have forfeited their furlough time until they provide him with a proper History textbook and debrief him. 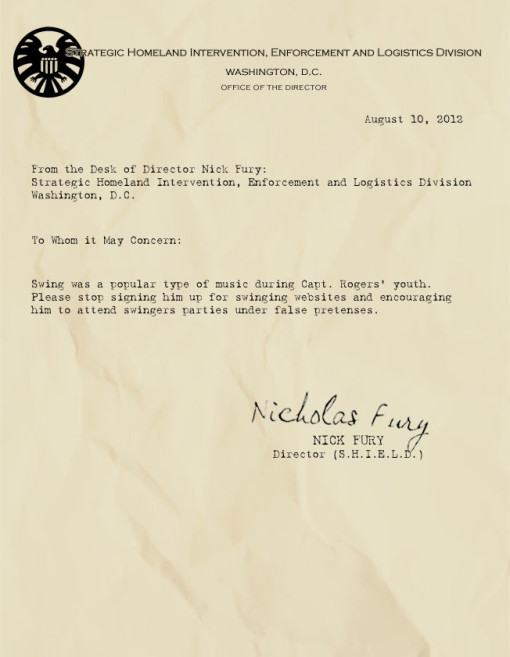 Swing was a popular type of music during Capt. Rogers’ youth. Please stop signing him up for swinging websites and encouraging him to attend swingers parties under false pretenses. 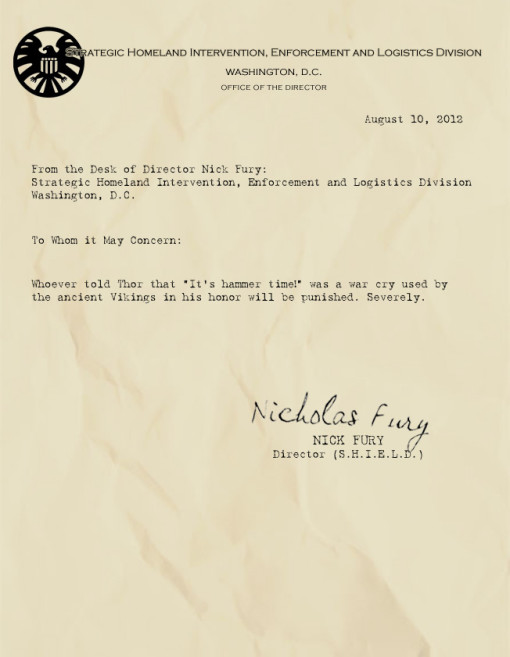 Whoever told Thor that “It’s hammer time!” was a war cry used by the ancient Vikings in his honor will be punished. Severely. 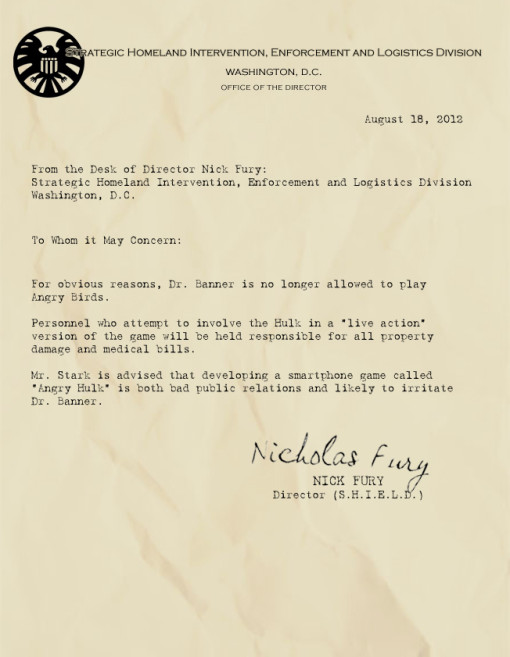 For obvious reasons, Dr. Banner is no longer allowed to play Angry Birds.

Personnel who attempt to involve the Hulk in a “live action” version of the game will be held responsible for all property damage and medical bills.

Mr. Stark is advised that developing a smartphone game called “Angry Hulk” is both bad public relations and likely to irritate Dr. Banner. 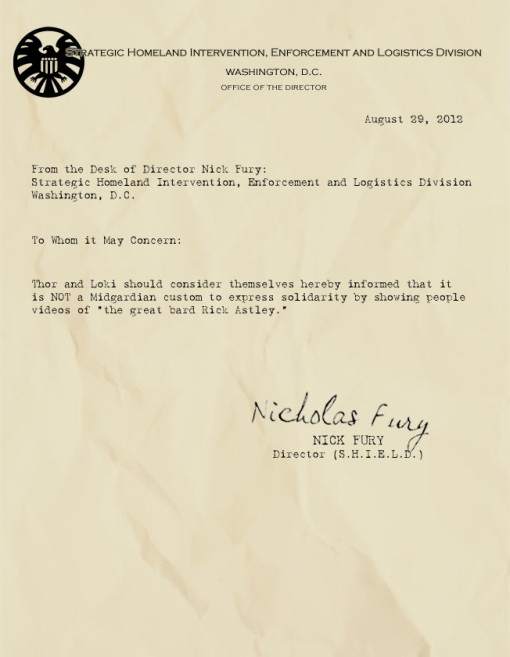 Thor and Loki should consider themselves hereby informed that it is NOT a Midgardian custom to express solidarity by showing people videos of “the great bard Rick Astley.” 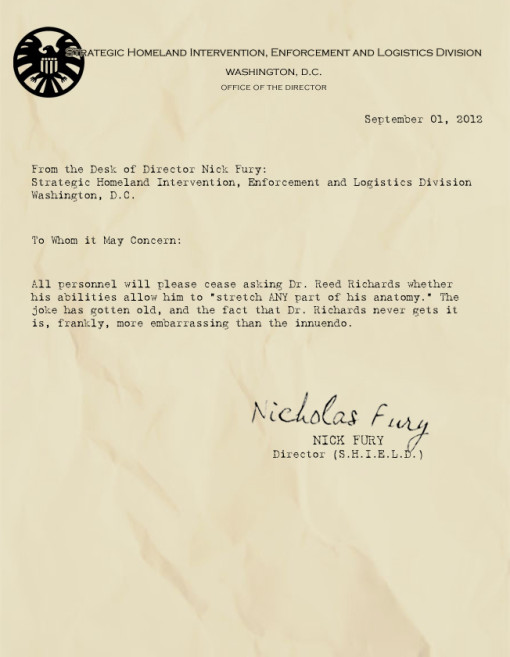 All personnel will please cease asking Dr. Reed Richards whether his abilities allow him to “stretch ANY part of his anatomy.” The joke has gotten old, and the fact that Dr. Richards never gets it is, frankly, more embarrassing than the innuendo. 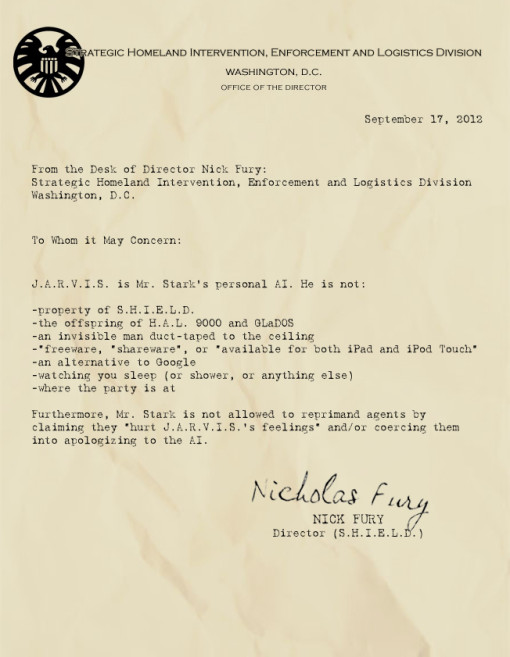 Furthermore, Mr. Stark is not allowed to reprimand agents by claiming they “hurt J.A.R.V.I.S.’s feelings” and/or coercing them into apologizing to the AI. 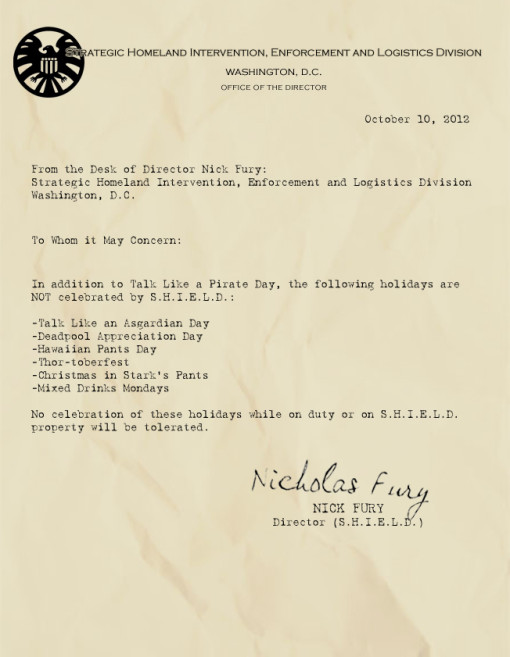 In addition to Talk Like a Pirate Day, the following holidays are NOT celebrated by S.H.I.E.L.D.:

No celebration of these holidays while on duty or on S.H.I.E.L.D. property will be tolerated. 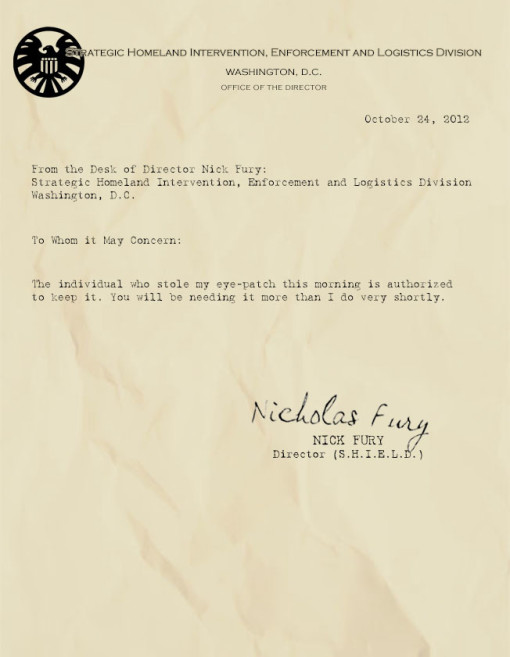 The individual who stole my eye-patch this morning is authorized to keep it. You will be needing it more than I do very shortly. 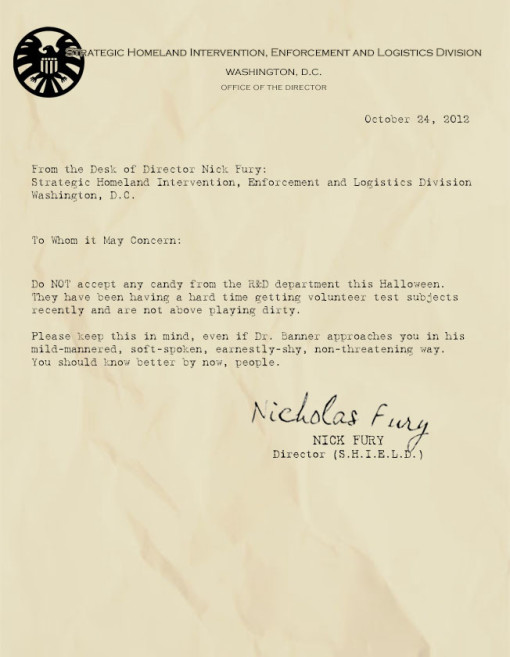 Do NOT accept any candy from the R&D department this Halloween. They have been having a hard time getting volunteer test subjects recently and are not above playing dirty.

Please keep this in mind, even if Dr. Banner approaches you in his mild-mannered, soft-spoken, earnestly-shy, non-threatening way. You should know better by now, people. 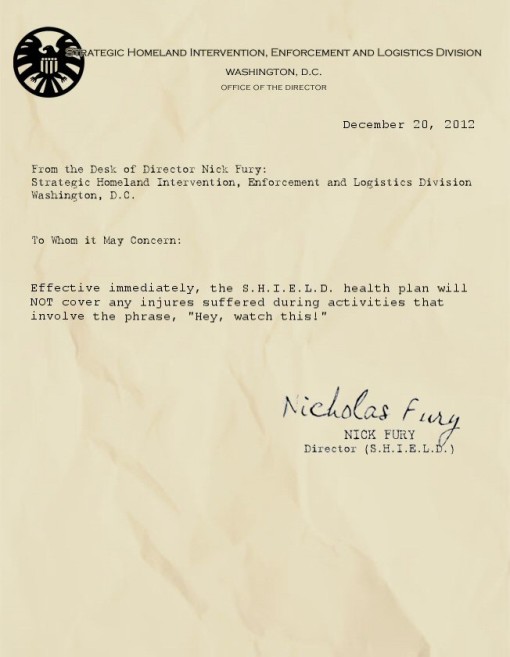 Effective immediately, the S.H.I.E.L.D. health plan will NOT cover any injuries suffered during activities that involve the phrase, “Hey, watch this!” 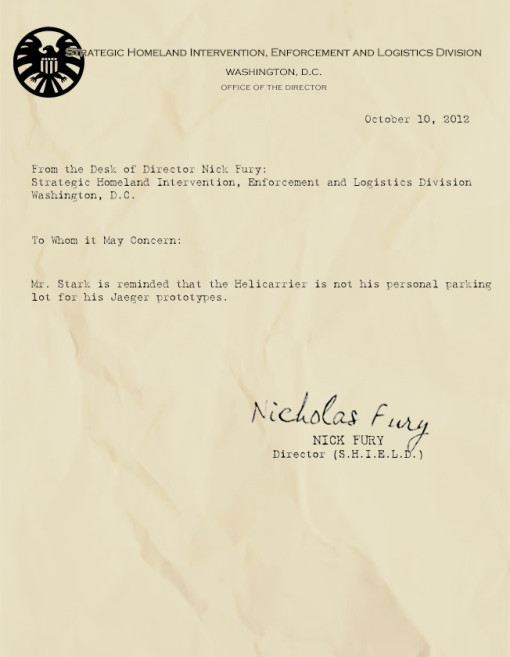 Mr. Stark is reminded that the Helicarrier is not his personal parking lot for his Jaeger prototypes. 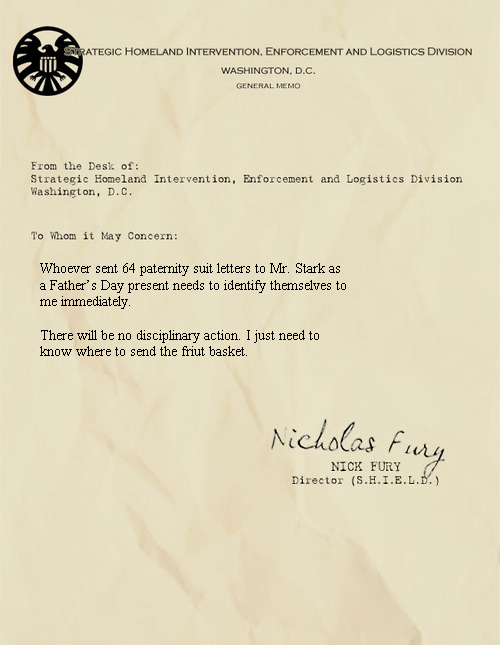 Whoever sent 64 paternity suit letters to Mr. Stark as a Father’s Day present needs to identify themselves to me immediately.

There will be no disciplinary action. I just need to know where to send the fruit basket. 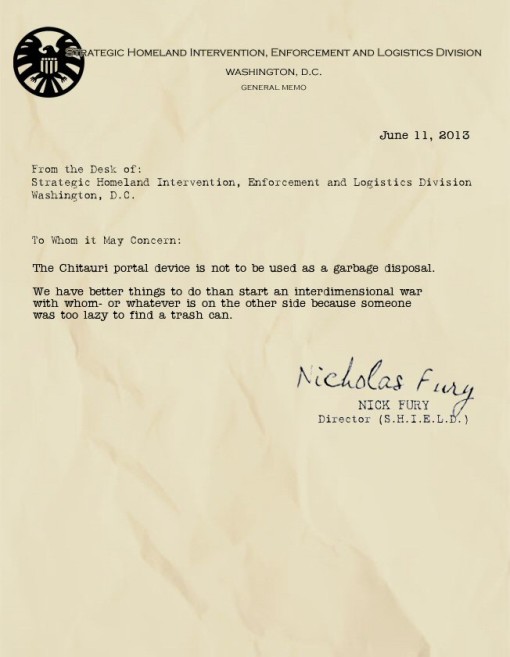 The Chitauri portal device is not to be used as a garbage disposal.

We have better things to do than start an interdimensional war with whom- or whatever is on the other side because someone was too lazy to find a trash can. 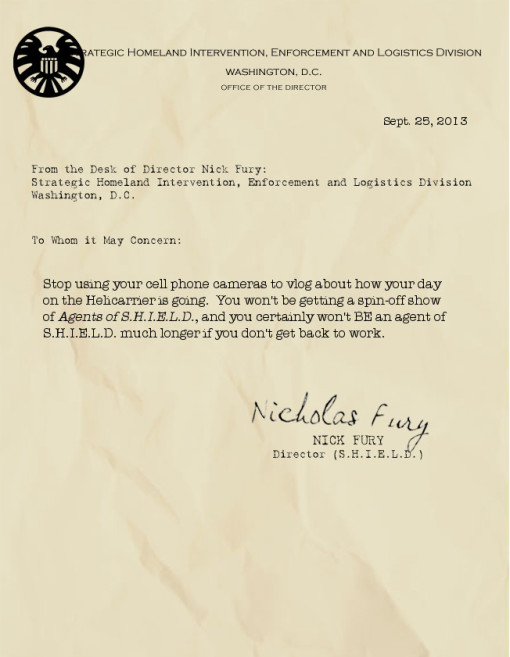 Stop using your cell phone cameras to vlog about how your day on the Helicarrier is going. You won’t be getting a spin-off show of Agents of S.H.I.E.L.D., and you certainly won’t BE an agent of S.H.I.E.L.D. much longer if you don’t get back to work.

These, and many more hilarious memos can be found at the Tumblr blog Memos From Fury.

Oh, and why does Nick Fury use a typewriter in this day and age, especially when he has some of the universe’s best technology at his fingertips? Because you can’t hack a typewriter, duh.

One Response to “Because Sharing is Caring [Memos from Nick Fury]”