Are Two Girls the Best?

People often ask us how many kids we plan on having, and our answer is: “It depends.”

J and I made a deal before we got married. J wants lots of kids. Like, enough for a full soccer team. (“But I’ll settle for a basketball team,” he says.

) I was never sure if I wanted kids, but if I were to procreate I thought that two would be a nice number, the reason being that one would be too easy to spoil and three would be too much for me to handle.

So we compromised. Since I would be the primary caretaker of the kids, we would aim for two. But if they were the same sex, we will try for a third.

What if the third is the same gender as the first two? We’d still stop at three.

That being said, J — as the oldest male in his family’s generation — has pressure from his parents and his own Asian guy pride. “We need to have at least one boy,” he says. I roll my eyes at him. The notion that a male is needed to pass down the family line and name is outdated and pretty sexist, in my opinion (and believe me, I have pretty conservative views when it comes to male-female gender roles). I tell him that even if we end up with three girls, his brother or a cousin can have a boy and the family will have to be happy with that.

What brings up this numbers and genders talk? Well, apparently a new study shows that having two daughters will lead to the most harmonious and happy family life.

What’s particularly interesting about the study is that while two daughters may be the best, doubling that number to four daughters often leads to a whole lot of mess. In fact, parents of four daughters turned out to be the least happy with family life overall.

Here are the ‘best’ to ‘worst’ combinations of children:

Innnnn-teresting! As my readers know, I come from a family of two girls. And although my sister and I didn’t exactly have the best relationship growing up (we usually just ignored each other), we’ve certainly grown a lot closer over the years. And whilst my family may have been through some difficult times, I would definitely say that my parents are generally very happy with their lives and — not to toot our own horns — their daughters. 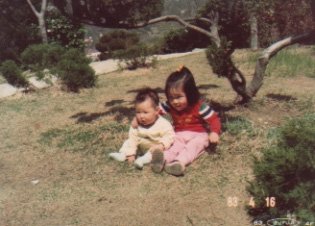 My sister and I, before we were old enough to fight over toys and clothes

And, as I’ve mentioned before, my father has confessed to me that he longed for a son in those early years…but after having witnessed his two daughters grow up, he now says that he wouldn’t have traded it for anything. He says that his two girls have taught him to be more sensitive, generous, and a better man overall.

J, too, grew up with one younger sibling but he comes from a family of two boys. His parents certainly seem proud and happy with their sons, but my MIL has confided in me that she would have loved to have at least one girl. My in-laws have even described to me how last year, when my FIL was admitted to the hospital for a surgery, they noticed that the only visitors his neighbors received were their daughters. “And if a son happened to visit? You could tell that his wife had made him do it!” my FIL added.

Since J and I already have one daughter, I hope that our second would be a boy. Not only because I’m scared three children would be too much for me to handle, but because I get worried that if we have two girls then a boy, the boy would get too spoiled (the same would go for two boys then a girl). Besides, two girls and a boy ranks seventh on the list above.

But after reading this study, I am now more convinced that having just two girls would be totally fine too.

What are your feelings on the study? How would you say your own family life compares?

18 Responses to “Are Two Girls the Best?”