At the Risk of Jinxing Myself…

The last time I wrote about Aerin, I had talked of switching from breastmilk to formula.

This is going splendidly.

Aerin has not spit up even once since we made the switch. She still has a bit of cradle cap, but aside from that her skin is smooth and clear. And at the risk of jinxing myself…

Ever since we made the switch, she has been sleeping in 7-8 hour stretches every night.

This has been going on for over 2 weeks now, and while I’m sure that we will hit hiccups in the road as she reaches growth spurts, her 4- month wakeful period, and teething, Aerin generally seems to be a happy and healthy child. 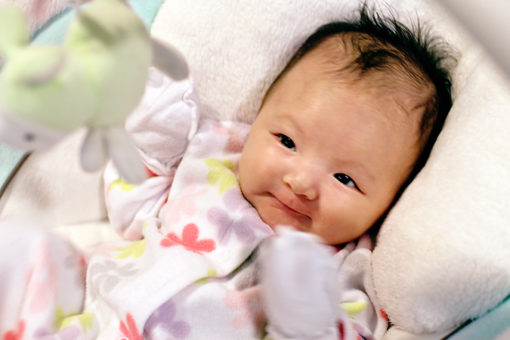 I know that we can’t chalk it all up to our decision to exclusively formula-feed, but even our pediatrician couldn’t believe the difference it made (literally) overnight. He said that some babies just aren’t meant to be breastfed, and commended us for making the decision.

One thing that the doc noted was that Aerin has very sensitive skin. He showed us how just a few seconds after he ran his hand gently over her bare torso, her skin became red and blotchy.

He said that there’s a good chance she will grow out of this by the time she reaches six months of age, and in the mean time we should keep a close eye on her skin.

Reader Christina had warned me that Aerin’s symptoms may re-appear after a few weeks because “the makeup of the formula is different and it shocks, for lack of a better word, the system long enough to improve symptoms before the body begins to react again.” Our doc said the same thing, and told us that if her symptoms flare up again we may need to switch to soy formula, and if that doesn’t work we will need hypoallergenic formula (“But let’s hope that doesn’t happen — hypoallergenic formula doesn’t taste very good and most babies don’t like it much!”). But for the time being, our Similac Sensitive (because 90% of Asian Americans have some sort of lactose sensitivity, and J and I are both lactose intolerant as well) seems to be doing the job well. 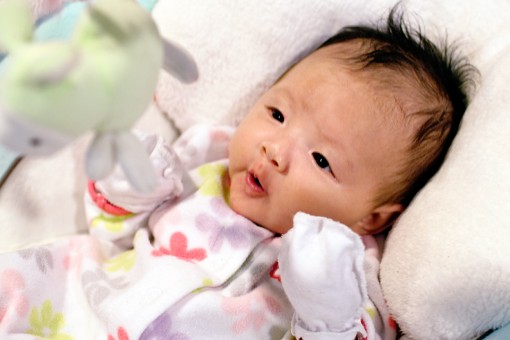 Yes, it still usually takes us at least an hour to put her down for the night as the dreaded witching hour continues to stick around. Yes, she still goes on her screaming-for-seemingly-no-reason spurts once in a while. And yes, we need to be much more mindful of her health than we ever did with Claire.

But the days of skin outbreaks, crying after every meal, and projectile vomiting are gone. And while I still have my moments, I am finally beginning to believe more and more the words of our pediatrician: “You’re doing a great job, mama.”

« Financial Hardships, and Being a Child of...
Oh, Rodney [NSFW Language] »

8 Responses to “At the Risk of Jinxing Myself…”