Batman Through the Ages [Infographic]

There’s only a week and a half left until The Dark Knight Rises hits the theaters! Is anyone else as excited as I am??!!! Because if rumors are to be believed, this final installment of the Christopher Nolan trilogy will be the best yet — and nobody can deny that The Dark Knight will be pretty difficult to beat.

(I recently read that Warner Bros. had originally planned on The Riddler, not Bane, as the primary villain in The Dark Knight Rises. And that they had wanted Leonardo DiCaprio for the role…HOW FREAKIN AWESOME WOULD THAT HAVE BEEN?!?? I mean, isn’t Leo just PERFECT for The Riddler? He would have brought to the role the same darkness that Heath Ledger had given The Joker…sigh. Perhaps they will make a future Batman film with this casting in mind.)

In anticipation of what will probably be the biggest film of the summer, Redditor gonzoblair has created an infographic titled “From Kane to Nolan: Seventy Years of Bat Evolution.” Check it out below — and don’t miss what he has titled the Joel Schumacher era! 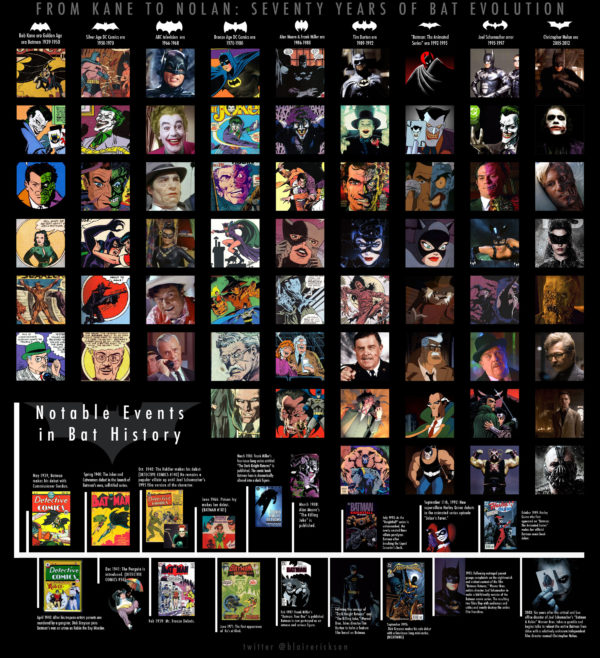 The Dark Knight Rises will be one of the few films that J and I purposely fork over extra money for the IMAX version, because it was actually shot with IMAX equipment, and not only converted to IMAX in post-production like most other movies. In fact, this movie will contain the most IMAX footage ever for a Hollywood feature. So if you have an IMAX theater nearby, try to see this latest Batman movie in the format for which it was created.

One Response to “Batman Through the Ages [Infographic]”