A couple of months ago, we noticed a small lump under Aerin’s left lower eyelid. (You can kinda see it in the first picture from this post about summer camp.) It wasn’t painful and it didn’t seem to bother her, so we took the “wait and see” approach.

But over the weeks, the lump grew larger and redder. We took Aerin to the pediatrician who suspected the lump to be a sty and — because it hadn’t gone away on its own — prescribed an antibacterial ointment. In addition to the ointment, we were to give her warm compresses, and hopefully the sty would go away on its own. 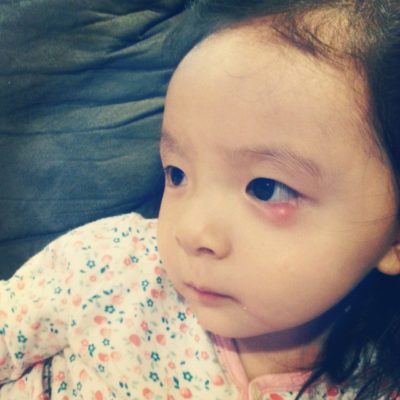 When Aerin’s eye didn’t get any better after 10 days, we visited the pediatrician’s office again. This time, we saw another doctor from the practice who prescribed an oral antibiotic. His recommendation was the same: medication and warm compresses. If it didn’t get better within a week, we were to call and get an referral for a pediatric ophthalmologist.

As you can probably guess, it didn’t get any better. And when we finally saw the ophthalmologist, he told us that the lump wasn’t a sty, but a chalazion. (A sty is a bacterial infection, while a chalazion is caused by a blocked oil gland.) Chalazia do not respond to medication, so the antibiotics we had been giving her were for naught.

The good news was that because the blockage was external and not internal, and because Aerin’s vision was not affected, she would not need surgery. He told us to continue to apply warm compresses to the area, and that the chalazion would eventually pop on its own.

And a few days ago, it did pop. While Aerin was in the bath. And you guys, there was SO. MUCH. BLOOD. (It probably looked worse because we were in water, but still.) And she cried SO. MUCH.

When the bleeding finally slowed, I applied some petroleum jelly to the area and covered it with gauze, then covered that with a large bandage. 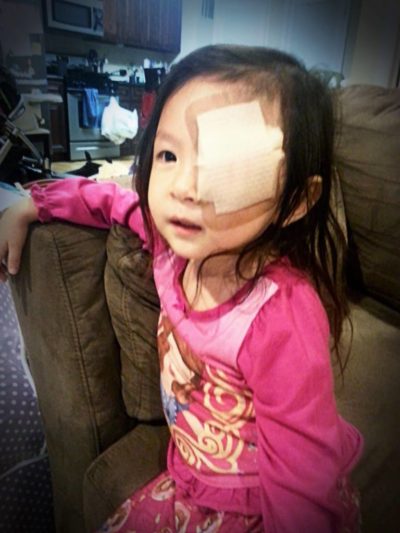 I considered taking her to the ER that night because a thin layer of skin had actually peeled down, exposing about ⅓” of raw, bleeding skin. J told me that I was overreacting — as you can see from the picture above, Aerin was in considerably better spirits after we dressed the wound — and told me that the doctor could wait until the next day.

Aerin woke up a couple of times that night from discomfort, and at 5am she shook me awake to hand me the bloody bandage she had ripped off. I quickly examined the wound to see that it was scabbed over, and decided to leave it alone and let it air out for a few hours. 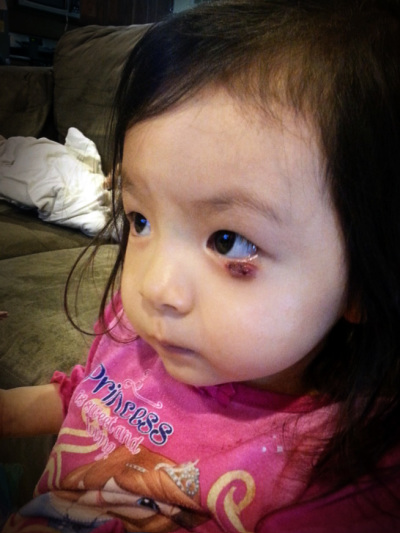 Aerin’s eye the next morning

I called the ophthalmologist’s office as soon as it opened, and they were able to fit us in for a quick examination. The doctor told me that the chalazion looked good, but because the wound was larger than what he usually sees, he prescribed an antibiotic ointment to apply to the area for the next couple of days.

He told me that the wound may continue to open/pop, ooze, and scab over for the next couple of months (!), but there is no need for concern unless it gets larger, or shows signs of infection.

And that’s what’s been happening for the past few days. Aerin’s chalazion continues to open, then scab over, and open, over and over again. All we can do is keep the area clean and try to keep her from picking at the scabs. 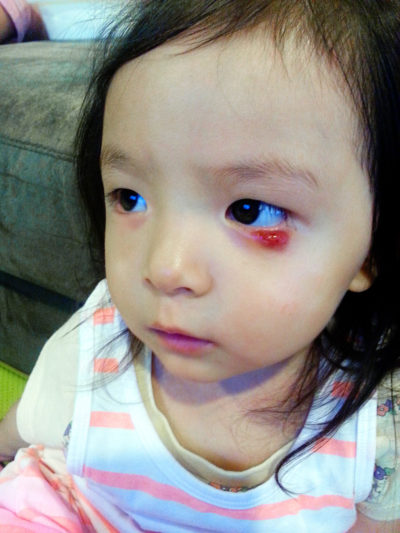 The picture above was taken right after the wound had opened again, so it looks a lot worse than it actually is. The swelling has gone down considerably and Aerin continues to be in good spirits. I know it could’ve been a lot worse and we should consider ourselves lucky, but it just sucks to see an injury on your child whenever you look at her face, you know? Here’s to hoping the chalazion will heal quickly and without any further complications…

« Fascinating Ways in Which ‘Based on a True...
A Comprehensive Chronology Chart of Disney Movies »