Last night, as I looked at the pictures from Claire’s dol (first birthday party), I started to cry.

You see, in Korean culture, a dol is one of the most significant birthdays in a person’s life. It is, in fact, THE most important birthday in a young person’s life…all the way up until they reach the age of 60! I wasn’t kidding when I stated in a previous entry that I have friends who have spent tens of thousands of dollars for their children’s dol‘s. You can see how all-out some Koreans go at Korean 1st Birthday Blog.

So as I flipped through the pictures, I couldn’t help but shed some tears. Because there were so many things I wanted to do, but did not pan out. Because I knew that my daughter deserves so much better. Because I felt that I had failed her as a mother.

Don’t get me wrong. I am so, eternally, words-can’t-fully-describe grateful and thankful that my mother and SIL volunteered to organize the party. My mother, who still works 70-hour weeks doing manual labor. My SIL, whose life is hectic enough preparing a move to the other side of the world. Without them, Claire’s dol probably would have been nothing more than some store-bought snacks and a birthday cake.

I knew that the party would be small and relatively low-key. I know that a kid’s birthday party is rarely perfect. And I know that Claire will not remember her dol.

BUT there were some things I wanted to happen, which did not…

1.) I wanted some family pictures. With my sister about to leave for Paris for 3 months, and my BIL & SIL moving to Shanghai in less than a month, this will most likely be the last time that the entire family — both my side and J’s — would be together for a long, long time.

Not only did we fail to get ONE family picture, we didn’t even get pictures of me or J — the guest of honor’s own parents! — with Claire.

2.) We had originally wanted to have Claire’s dol on a Sunday afternoon for two reasons:

However, we were not able to have the party today because J had an out-of-town trip planned. We could not hold it yesterday (a Saturday) either, because Saturdays are the busiest days of the week for my parents. So we settled on 5:00 on a Friday evening — my mother left work early to finish preparing the food, and my father left work early too in order to attend. Both J and his brother took the day off from work. As for the small number of other guests? They all arrived when they were able to, meaning that they all came hours late, at different times.

3.) I had not slept well the night before, my hips were acting up, and I was throwing up everything I ate. Either BebeDeux was intent on making me be miserable for her older sister’s party, or my body just wasn’t cooperating (or both). By the time the guests started to arrive, I was exhausted, cranky, and all I wanted to do was lie down and take a nap. I could barely keep a smile on my face, let alone gather people up to take family pictures.

In spite of all this, the guests seemed to have a good time. My mother had volunteered her house and prepared the food, while my SIL took charge of the decorations. The best part was that Claire was not quite as cranky as I had feared she would be…but then again, this might have to do more with the fact that at least one person was holding her and carrying her around the entire time.

Now, on to some pictures…

My SIL really outdid herself with the decorations, don’t you think? 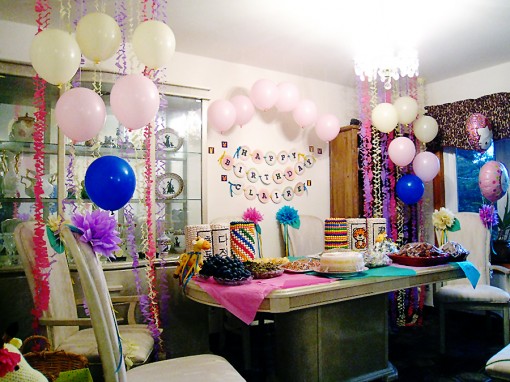 These dol towers are traditionally made with rice cakes, fruits, candy, and beans. They can get pretty expensive to rent or buy, so my SIL made them herself! The one furthesr to the left says “Congratulations on your first birthday” and the one next to that has Claire’s name in Korean. Meanwhile, the dol tower on the far right is Claire’s name in Chinese. As for the tiger? It’s because Claire was born on the year of the tiger! 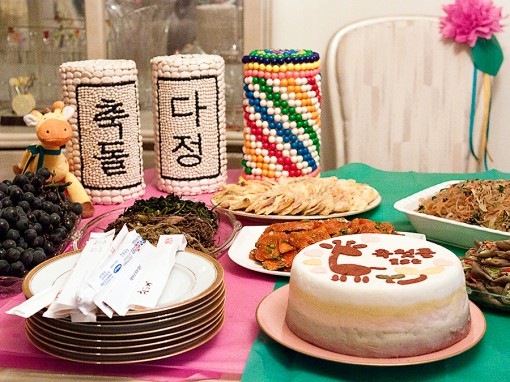 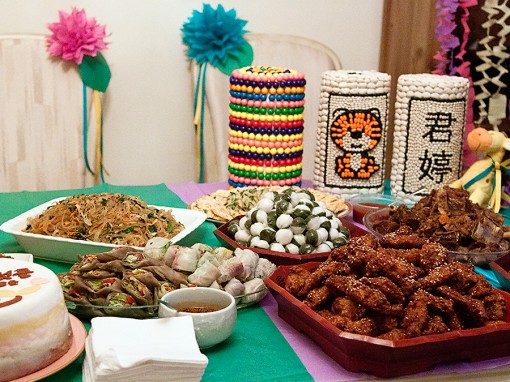 My SIL also hand-made the birthday banner. I can’t even imagine how much work went into all this. (Be sure to check out her craft blog for more goodies!) 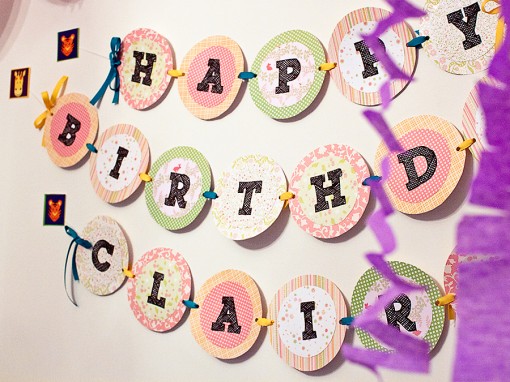 There were stuffed giraffes on either side of the table, because Claire’s lovey is a stuffed giraffe (which can be seen here) and so we like to think that the giraffe is her favorite animal. 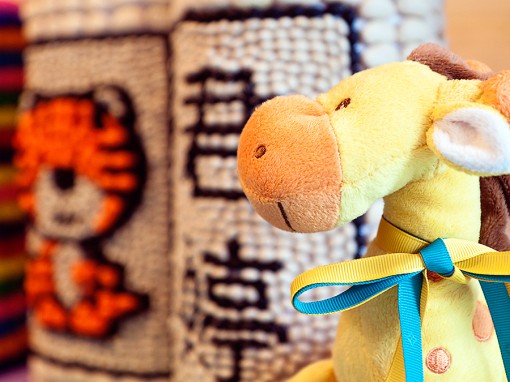 Coincidentally, the cake that my mother got for the party — which is not a traditional western cake but rather a rainbow dduk (Korean rice cake) cake — had a giraffe on it too! She didn’t plan with this with my SIL at all. In fact, she said that she thought the design was a pony. 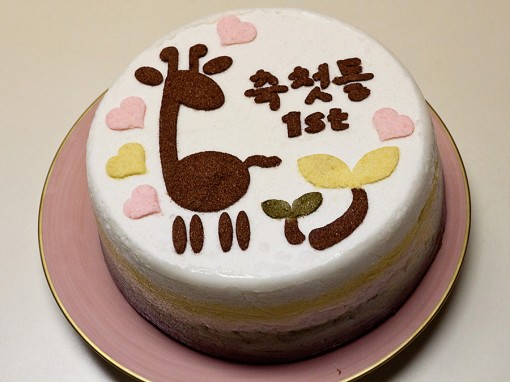 At first, Claire started off wearing a silk floral dress I had purchased for her earlier in the week (here she sits with J’s parents)… 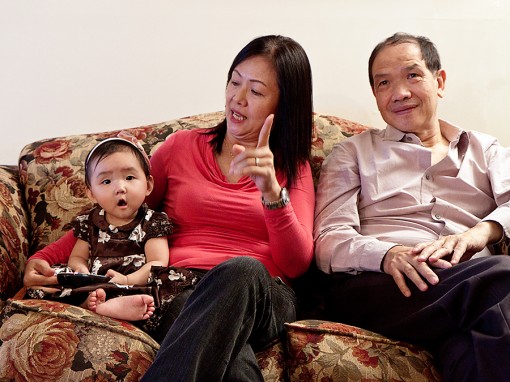 But soon, she changed into her very first hanbok (Korean traditional dress) which, once again, my very generous SIL gifted us. 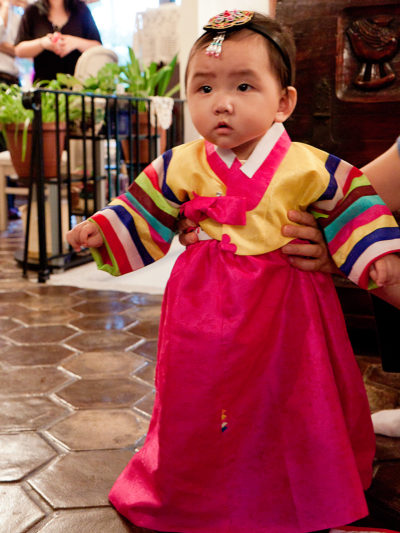 Claire with my sister. I love this picture. 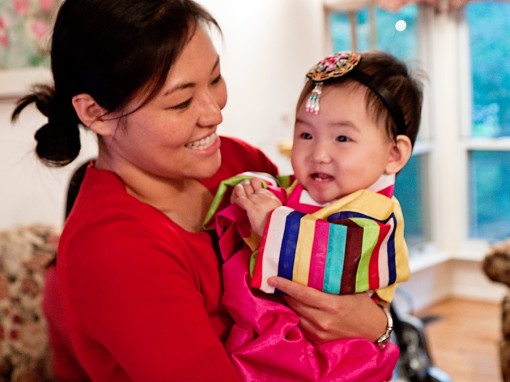 Claire with my BIL and SIL. (Seriously. She looks more like their kid than ours!) 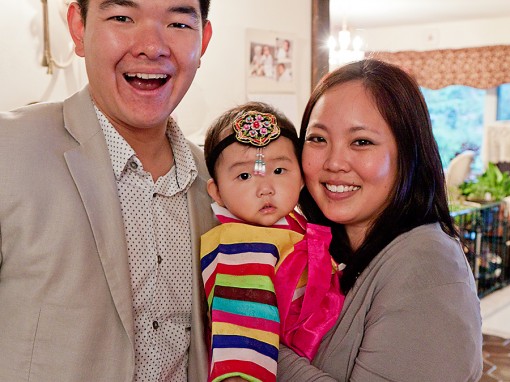 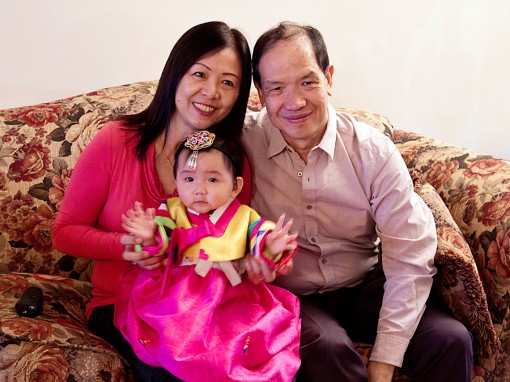 And with my parents. 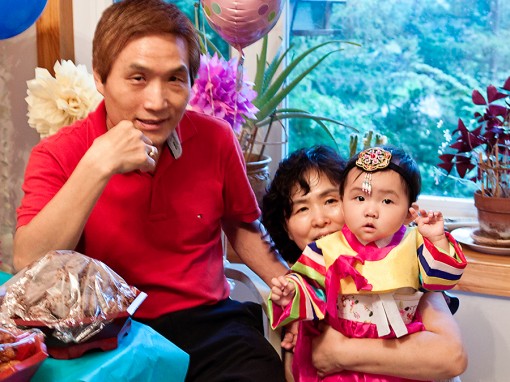 Soon, it was time for doljabi, a short game that is played on a child’s first birthday. Traditionally, three objects are placed on the table in front of the child: a brush, money, and string/yarn, and whichever the child picks up first is supposed to predict his/her future. A brush means that the child will become a scholar. Money is supposed to lead to wealth, and strong/yarn represents long life.

(I picked up the brush at my dol, and my sister chose money.)

In recent years, more items have been getting added to the doljabi, such as stethoscopes, toy golf clubs, calculators, and such. We decided to keep it simple and play it traditional. However, we did not have traditional calligraphy brushes in the house, so we substituted pens instead. 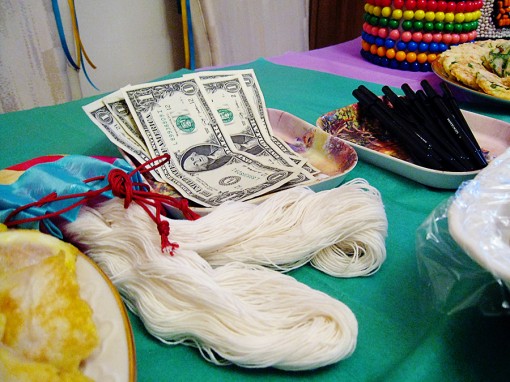 What will Claire choose? 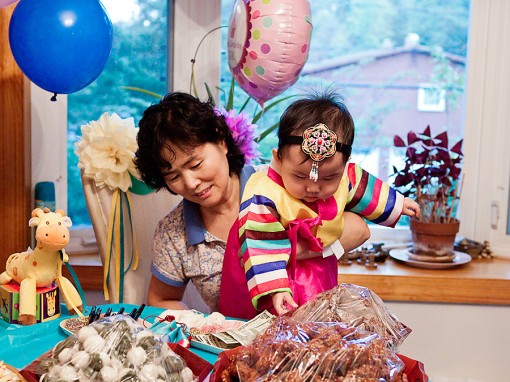 She didn’t even hesitate — girlfriend went straight for the money! 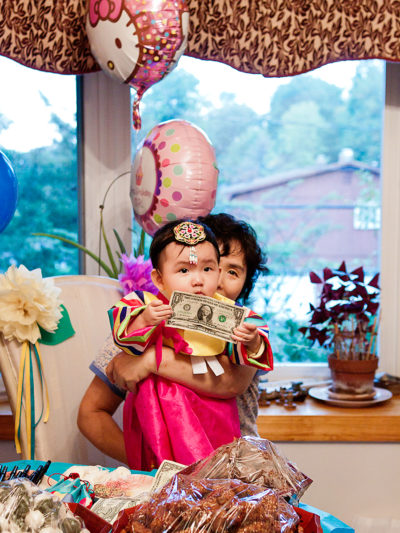 Lastly, a picture with my doting mother: 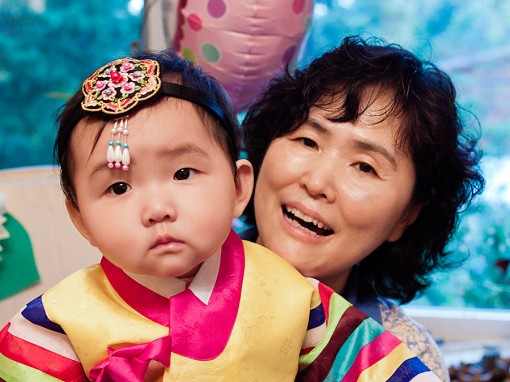 Now that I’ve calmed down some, I am feeling better about Claire’s dol. So what if we didn’t rent out a party space or a banquet hall? So what if we didn’t hire a photographer, a party planner, or get everything professionally catered? Just look at the love and dedication that pours from these pictures, not only for Claire but also for her heavily pregnant mother, me.

Beisdes, I think what upset me the most is that we were not able to get more photos, specifically, of me and J and Claire.

(J says that we can dress in the same outfits again and take pictures, pretending that they were taken on Claire’s birthday. Right, buddy. That’s not exactly how it works.)

But when you really think about it, photos are just records of memories. Yes, memories fade and pictures may be all we have to rely on years down the road. But that doesn’t mean that we can’t make more, better memories, right?