Soon after Claire was born, we received a package from our Canadian friend Girl on the Park — an adorable stuffed giraffe for Claire!

We kept the giraffe in Claire’s crib through sleep training and teething, often placing it into her arms so that she could use it as a source of comfort. Before long, it be came apparent that this giraffe had become Claire’s lovey. 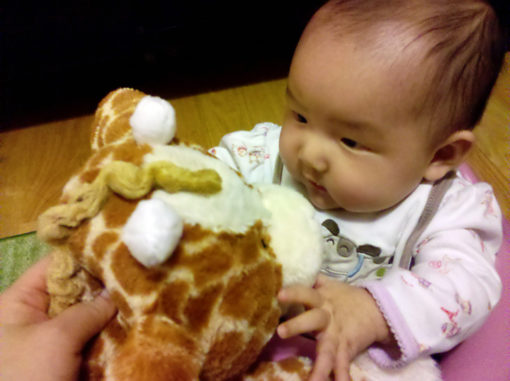 Claire at four months with her lovey.

When we realized how attached Claire had gotten to her giraffe, I quickly sought out a duplicate and purchased it so that we can have another on hand just in case the original became damaged or lost. We kept both in her crib and always washed them together so that they would be indistinguishable — but our smart-as-a-whip daughter would not have it. We couldn’t tell them apart and we still have some trouble picking which is which, but Claire always knows IMMEDIATELY. All efforts to switch the identical giraffes, to trick her into taking the impostor, have failed miserably as she will take one look and sniff and shoot us a look that plainly states, “Are you effing kidding me? You think you can trick me? Think again!”

In the past, Claire’s interactions with her giraffe have been limited to her carrying it around, hugging it, and sniffing its ears. But now that Claire is getting older and has a little sister whose interaction with her caretakers she keenly observes, they have become much more complex and at times, simply adorable. 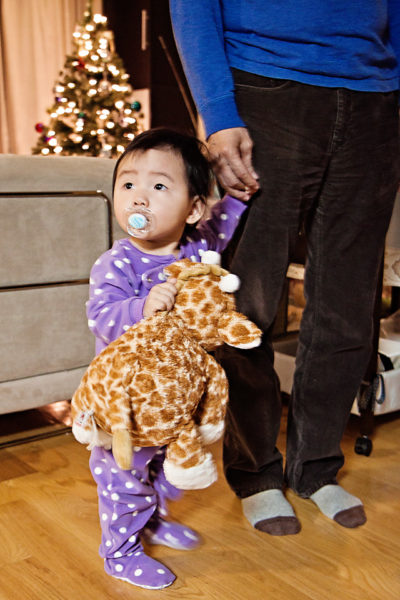 Claire now tries to take care of her giraffe just as we take care of Aerin. She will try to give it food, burp it, and even try to put diapers on it! When we are preparing to go out, she will take a pair of her shoes and try it put them on the giraffe. She places blankets over the stuffed animal and sings to it while rocking it in her arms.

But the best interactions with Claire’s lovey have occurred in the past week, because she has begun to groom it as well! She tried to bring it with her into the bathtub on numerous occasions, and became deeply upset to have it taken away before it could get soaking wet. She combs its fur every day, and yesterday — I am told that yesterday was an extra special treat to witness.

I unfortunately was busy with Aerin at the time, but according to J and my sister (who was over to help out for the day), Claire laid a piece of tissue on the coffee table and spent some time arranging it so that it was placed perfectly without any wrinkles. She then took the giraffe — and J and my sister tell me that it took them a minute or two to figure out what she was doing — and picked out the lint in its fur, carefully placing each piece onto the tissue!

I can only surmise that she has picked up this behavior from watching me pick loose flakes from Aerin’s hair (from cradle cap). That, or our eldest is already showing signs of OCD.

Before Aerin was born, I had been contemplating purchasing for Claire a baby doll so that she could take care of it and feel like a responsible, helpful big sister. Now, I know that a doll is not needed as the stuffed giraffe seems to be doing the job just fine.