1. Did you know that you can embed Tweets?

Just mouseover the tweet I have embedded below. Notice that the tweet is “live,” meaning that all the links (such as the “Follow” button) clickable and functional.

So they’re watching Knicks in Taipei but I can’t get the game.#iliveheredammit

Apparently I seem to be one of the last people on earth who did not know this feature existed. And if you too, are thinking, “THIS IS COMPLETELY NEW INFORMATION TO ME!”, here’s how you do it: 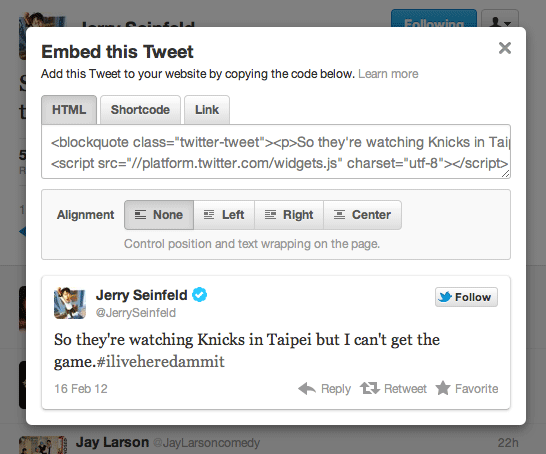 While most people will want to use the HTML, the Shortcode option is a great one for those who are blogging from a platform — like WordPress.com — that allows Twitter shortcodes. (If you are a WordPress.org user, you can install the Modern Media Tweet Shortcode plugin to get the shortcode working.)

Yesterday, I chuckled over the following meme on Reddit: 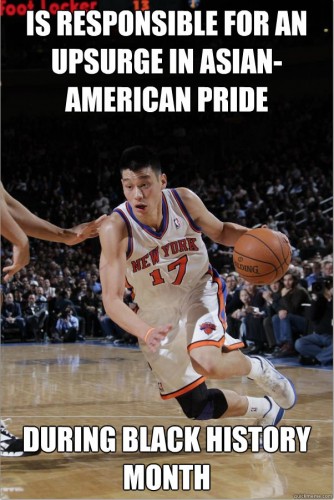 And today, I saw that last night’s The Daily Show with Jon Stewart had a segment of a similar note, one that is full of corny Lin puns and sarcastic humor that is so classic of the comedic news show. Check it out yourself:

J and I try our best to attend at least one Knicks game every season (if only they weren’t so expensive!), and this year’s visit to MSG will be this Sunday!

Needless to say, I am super stoked. I am crossing my fingers that this game will surpass the best NBA game I’ve attended so far (which was a Sixers vs. Lakers game in 2001, when they went to the Finals) and you know that I will be decked out in Jeremy Lin gear!

Sunday’s game is a nationally televised one (ABC), so I’m thinking of making a catchy sign. Any suggestions?